While attending last week’s July 4th boat parade on Bayou St. John, led by the Krewe of Kolossos, I was reminded of a letter I came across last summer. The flotilla’s preamble was not merely the spreading of picnic blankets along the bayou’s shore, or the adjusting of raft decorations, you see. It also involved several surprising aerial feats!

Like this backlit bike flip, facilitated by a wooden ramp on the bayou’s edge:

Or these guys climbing to the top of Magnolia Bridge (aka Cabrini Bridge) and hurling themselves off: 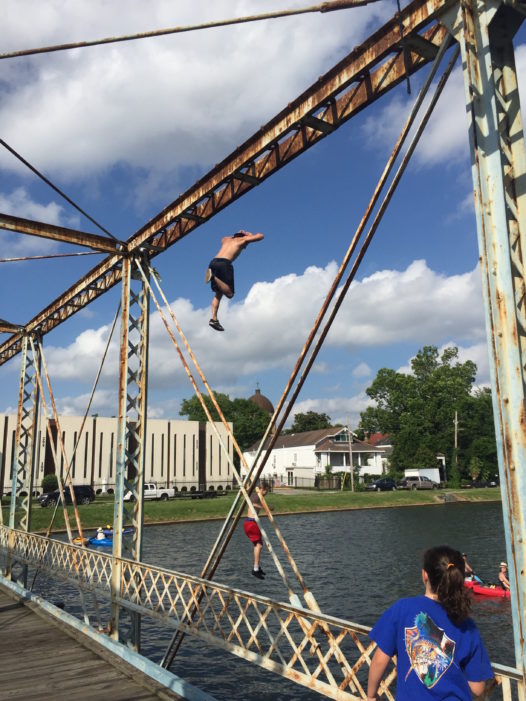 These guys were the ones to remind me of that letter I came across while doing some bayou research at the New Orleans Public Library last summer. The letter was written by a certain Walter Parker, Chairman of the Bayou St. John Improvement Association (and future mayor of New Orleans), to Honorable George Reyer, Superintendent of Police, and dated April 10, 1934. It read as follows:

“It would help a great deal were some of your men to pass along the Bayou as frequently as practicable. Some boys who do not have bathing suits, do not hesitate to bathe in very scant underwear. At the Dumaine Street bridge many boys make the dangerous practice of climbing on the bridge structure. At the Magnolia Bridge (Harding Drive) boys dive from the top of the bridge pretty much all day.” [1]

Boys in their undies, jumping off bayou bridges “pretty much all day”!

What complicated this practice (aside from the boys showing a lot of skin) was that, at the time this letter was written, quite a few houseboats still occupied the bayou. Many of them had electrical and even telephone hookups, but virtually *none* were equipped with any kind of on-board “sewage management.” Meaning…the sewage went straight into the bayou. The four-foot-deep, barely-flowing bayou. Walter Parker was not only perturbed by their rowdiness, but also apparently concerned for their health.

The letter goes on to cover another issue we’re all familiar with when it comes to outdoor festivals, particularly those along the bayou: litter!

“In so far as I know, people have a right to fish [and organize flotillas] on the Bayou. But when they leave crab bait, old papers and remnants of lunch behind, they create a nuisance. I have found that such things usually are the result of thoughtlessness rather than viciousness, and a simple request or word of warning brings a correction….”

Does this tension between recreational use of the bayou and concerned bayou residents sound familiar? I hope none of you left any crab bait behind when you packed up to head home last Monday evening. Or old papers! Or remnants of lunch! Or jumped off the bridge scantily-clad! But if you did, you’ve simply joined the ranks of the bayou’s many nuisance-makers throughout our city’s history….