This past weekend, my #1 travel companion (and everyday companion) Lauren Gauthier and I took a trip to south-central Louisiana, passing through small towns along Bayou Teche on our way to and back from Lafayette. 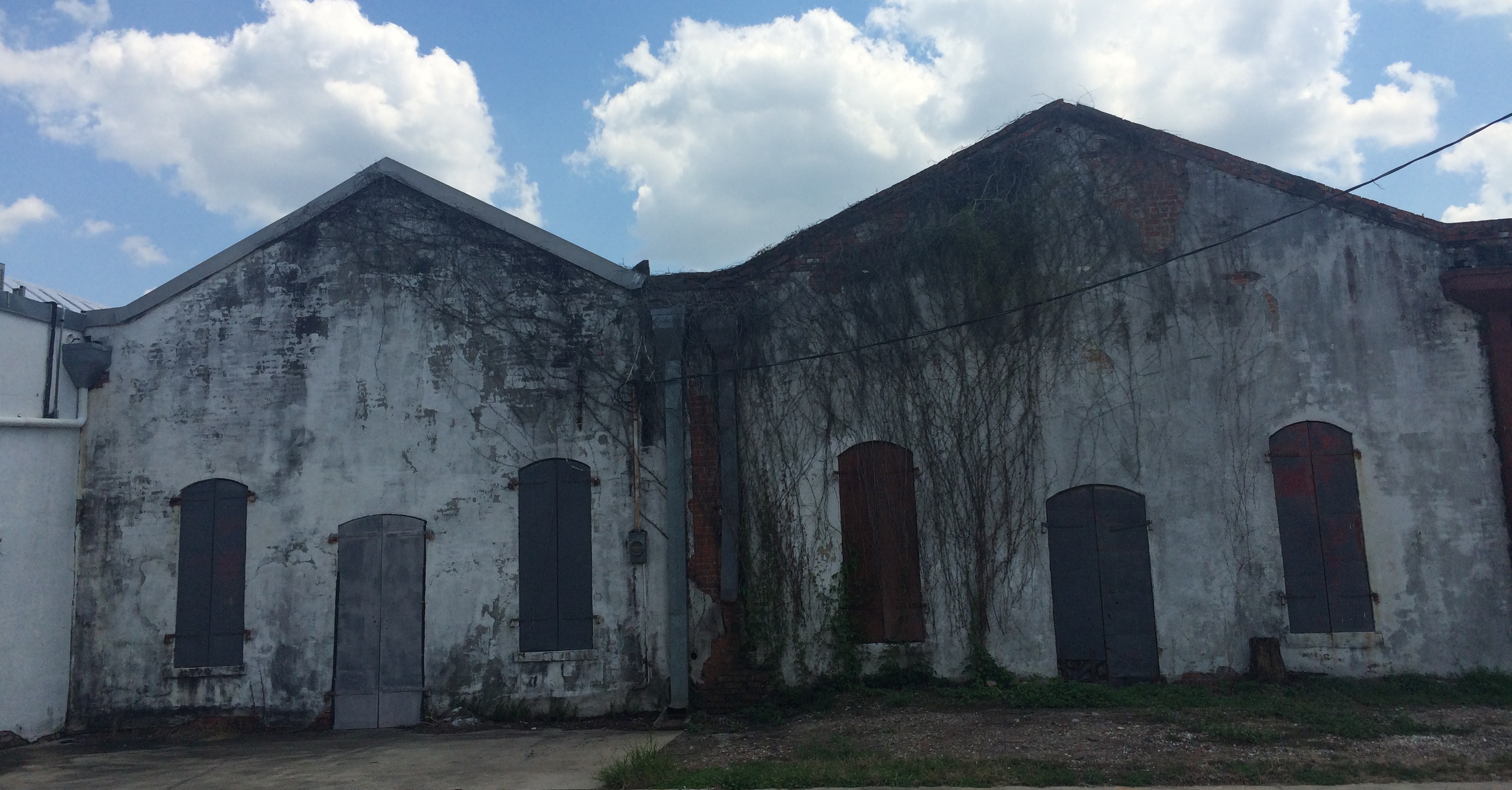 Through a process called “deltaic switching,” the Mississippi River, that swinging arm of mud-water (well, not to much anymore…) once occupied the path Bayou Teche travels now, roughly 2,800-4,500 years ago. To *swing* this back to my Bayou St. John project, the BSJ is itself a remnant, albeit a much, much smaller remnant, of an even more recent switch called the St. Bernard deltaic lobe. Hell, any water you see around south Louisiana is probably some kind of remnant of the great Mississippi, but Bayou Teche is a particularly important one.

Here is a colorful visual of the process I’m talking about: 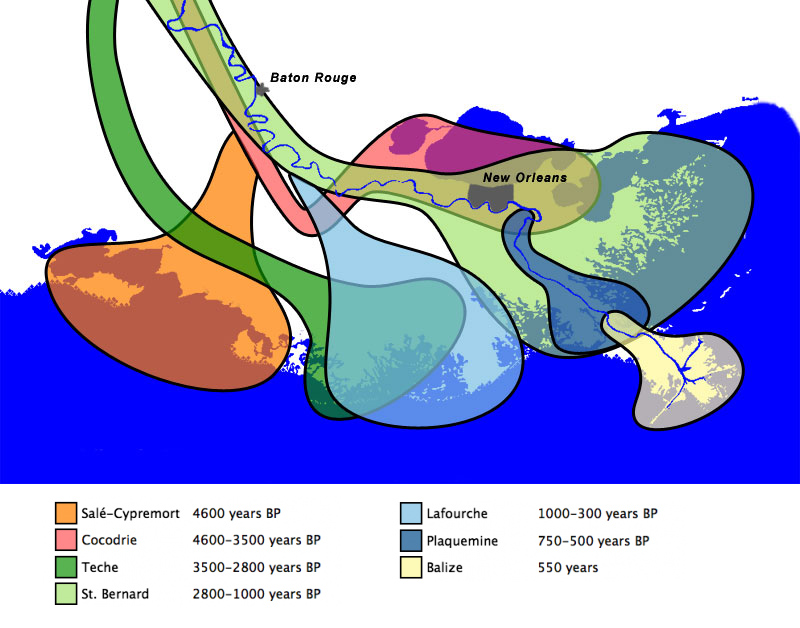 And another, more artistic, rendering of the Mississippi’s wild dance from a series of plates made in 1944 by Harold Fisk: 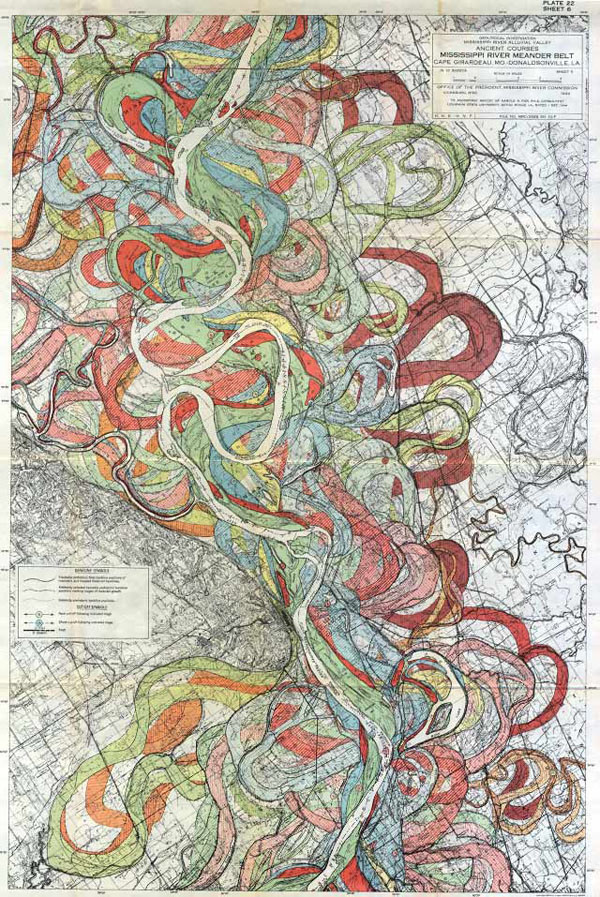 Ok, back to the trip. During a period called The Great Expulsion, from 1755-1764, the Acadians (descendants of French colonists who arrived in Eastern Canada’s maritime provinces in the 17th century) were ousted by the British and sent all over tarnation. Some of them ended up settling along Bayou Teche, creating what has come to be known as “Cajun country.”

New England poet Henry Wadsworth Longfellow wrote an epic poem about the Acadians in the mid-19th century calledEvangeline(“From the bleak shores of the sea to the lands where the Father of Waters / Seizes the hills in his hands, and drags them down to the ocean….”).

I could go on and on about the unique influence this group of people—together with descendants of the French, Spanish, and African folks (Creoles) who settled (or were forced to settle) in Southeast Louisiana—have had upon this low-lying, swampy, sugarcane-carpeted corner of the U.S., but I’ll try and let the photos do the talking….

First stop: Morgan City,on the banks of the Atchafalaya River. 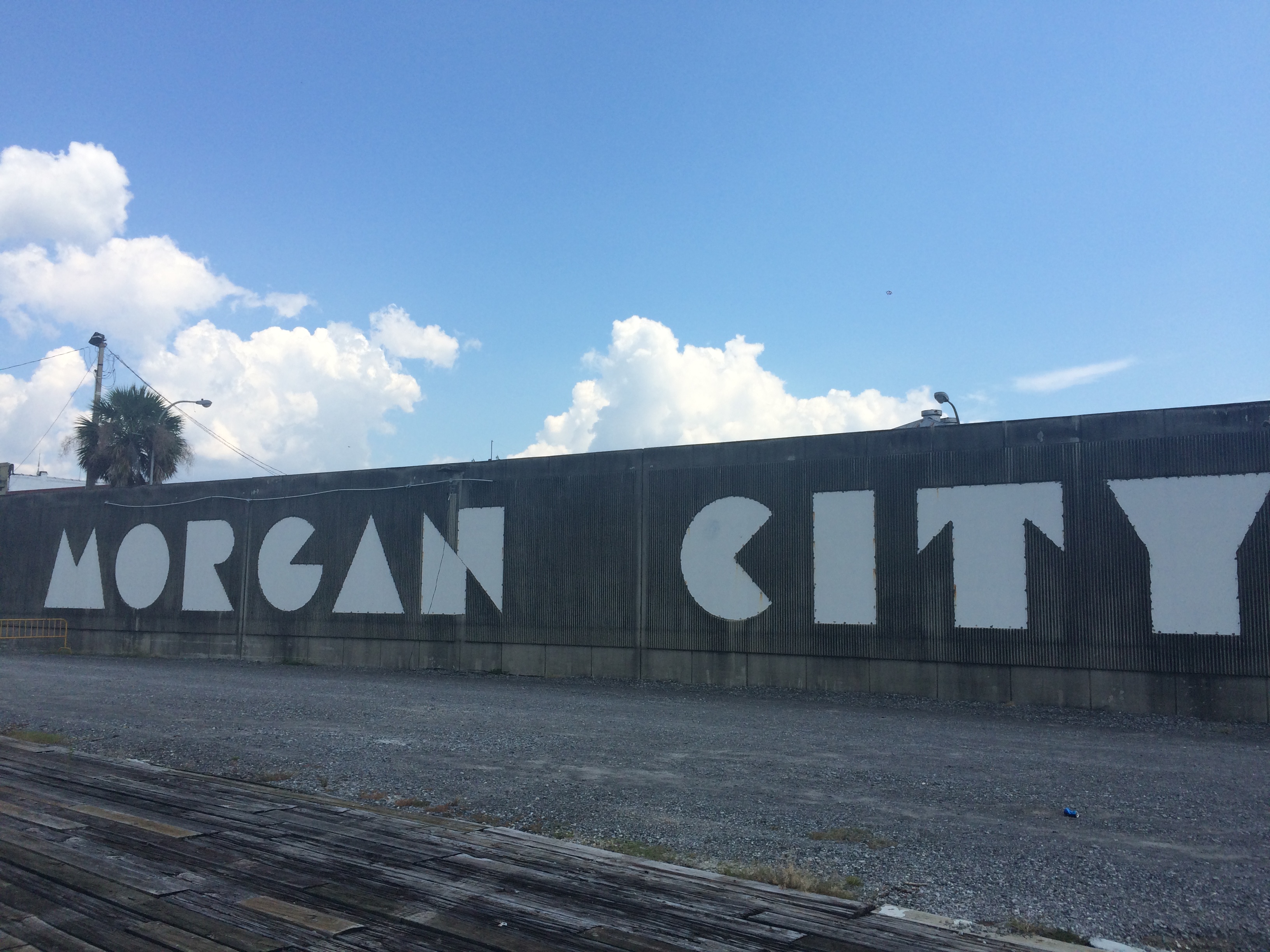 I, like, really want to tell you about the relationship between the Mississippi and Atchafalaya—about how the Miss is dying to swing to the west and completely merge with the Atchas we speak,effectively abandoning all the towns and cities below the Mississippi/Louisiana state line, like Baton Rouge and New Orleans, but is prevented from doing so,as we speak,by one of the most massively impressive feats of engineering on the planet, the Old River Control Structure—but I’m not going to get into it here. Instead, if you’re interested, read this long-but-mind-blowing essay by John McPhee on the subject.

Next stop: New Iberia, with its own unique history: in 1779, a group of people from Malaga, Spain, settled the town, and it is now the only Louisiana town founded by Spaniards in the Colonial Era still in existence. 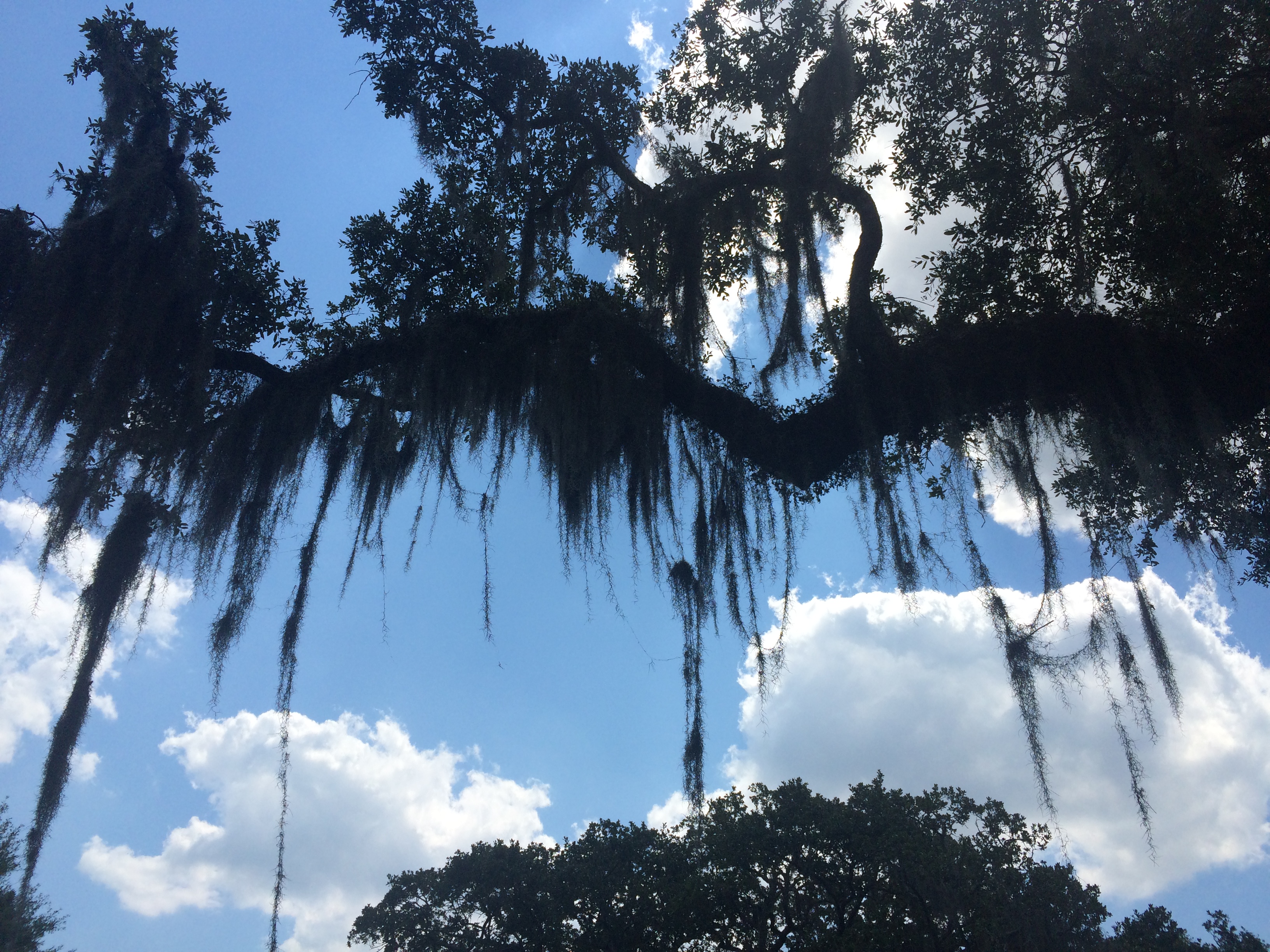 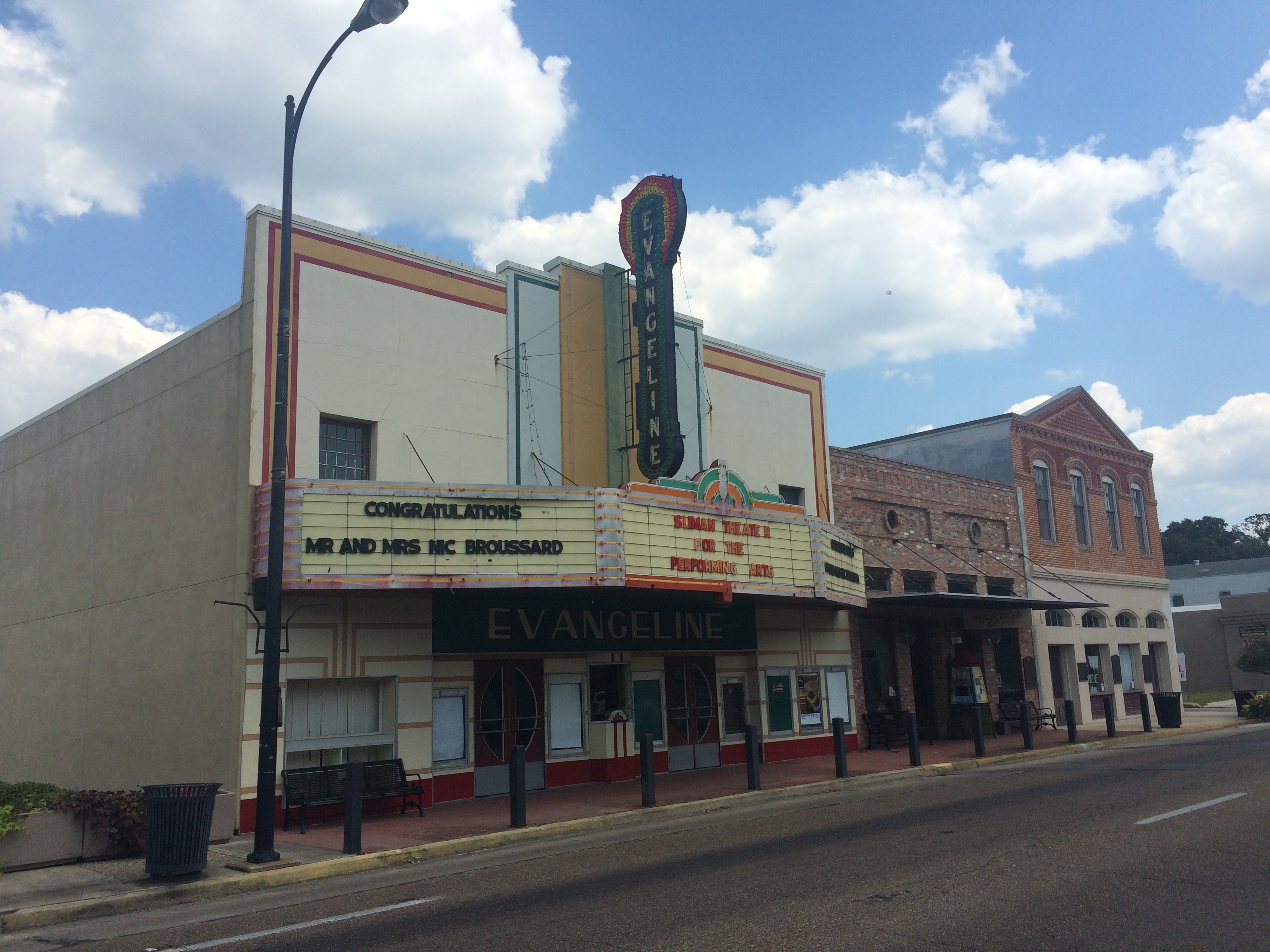 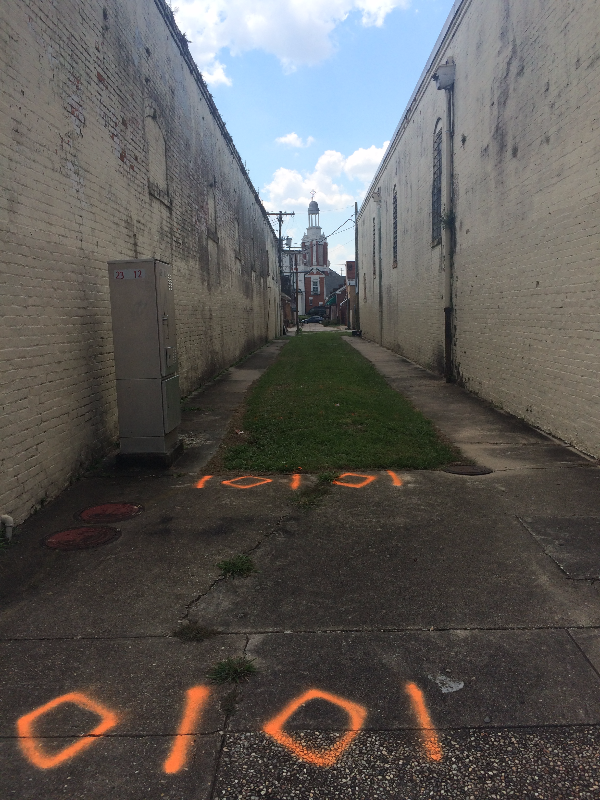 Then to Lafayette,where we spent the night dancing to Zydeco at the Blue Moon Saloon: 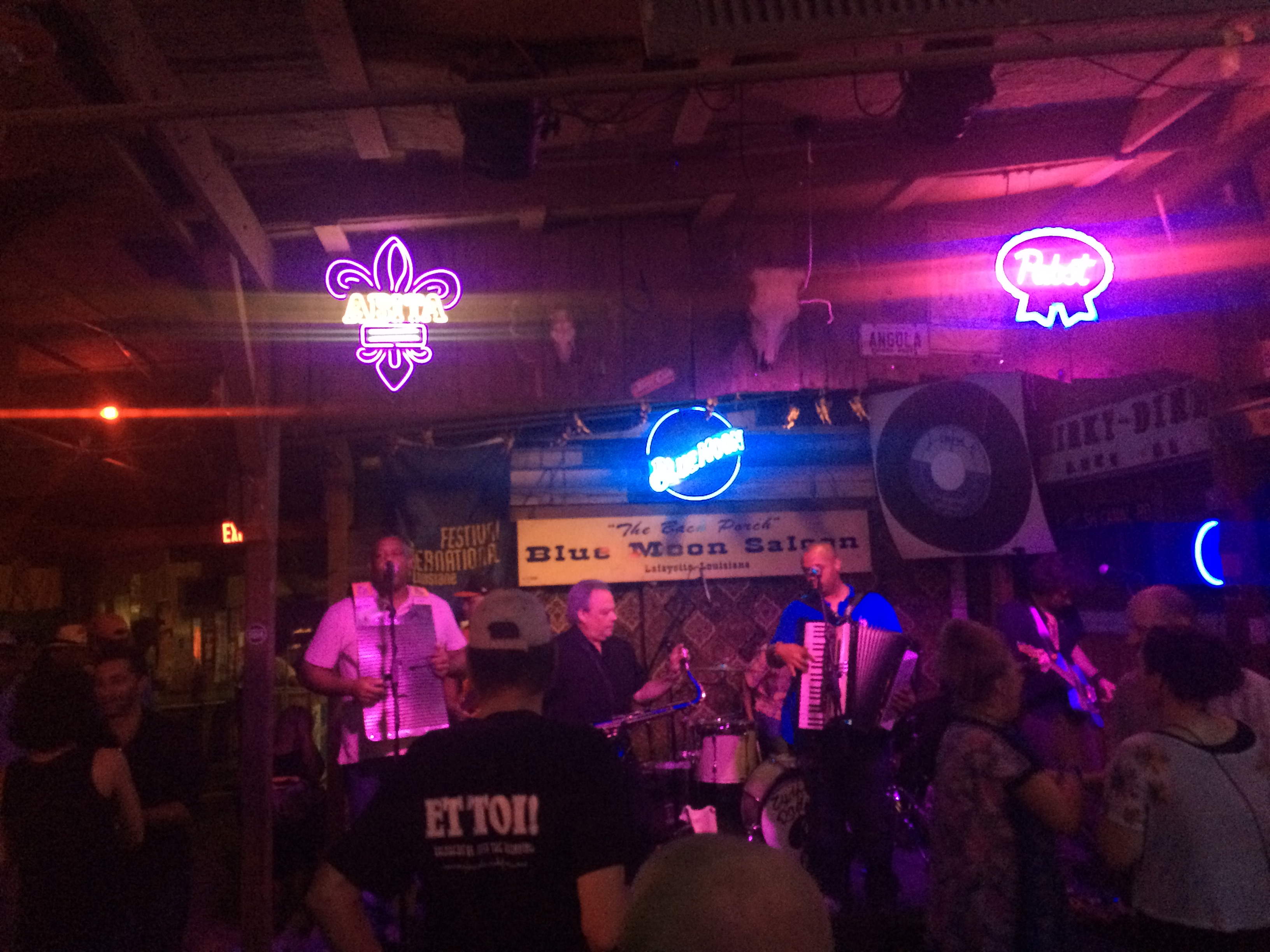 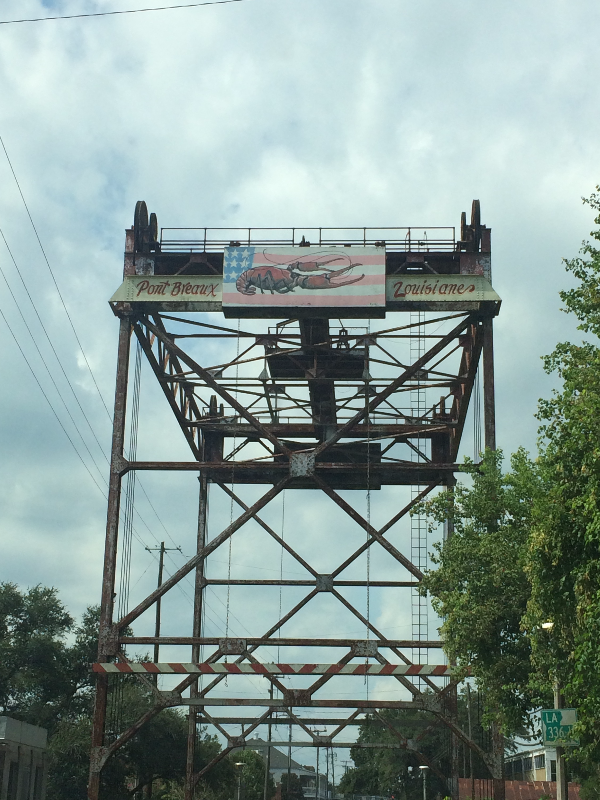 And, lastly, we took a canoe out on duckweed-choked, cypress-studded, moss-draped Lake Martin,which in most places was only 2-3 feet deep. 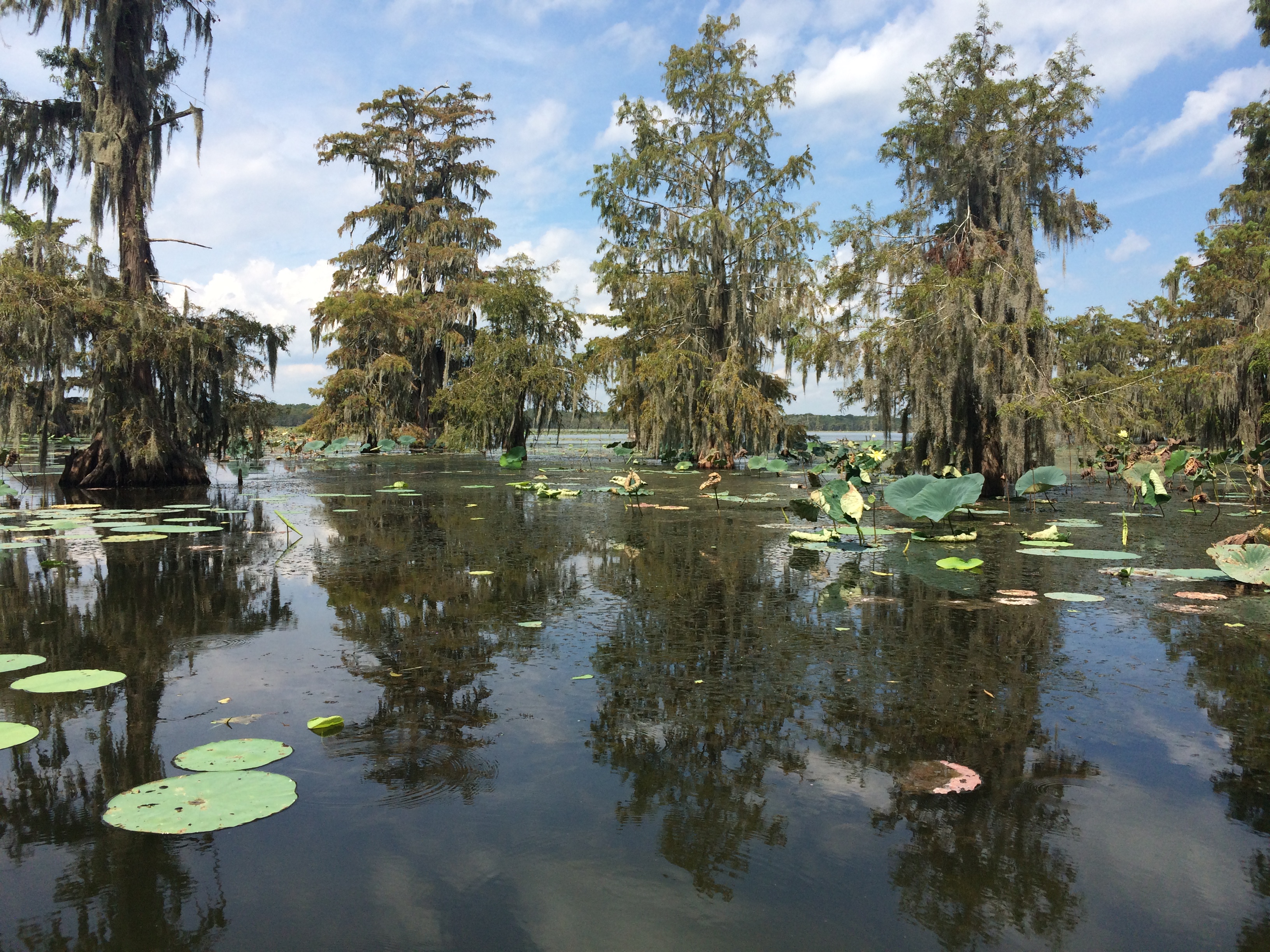 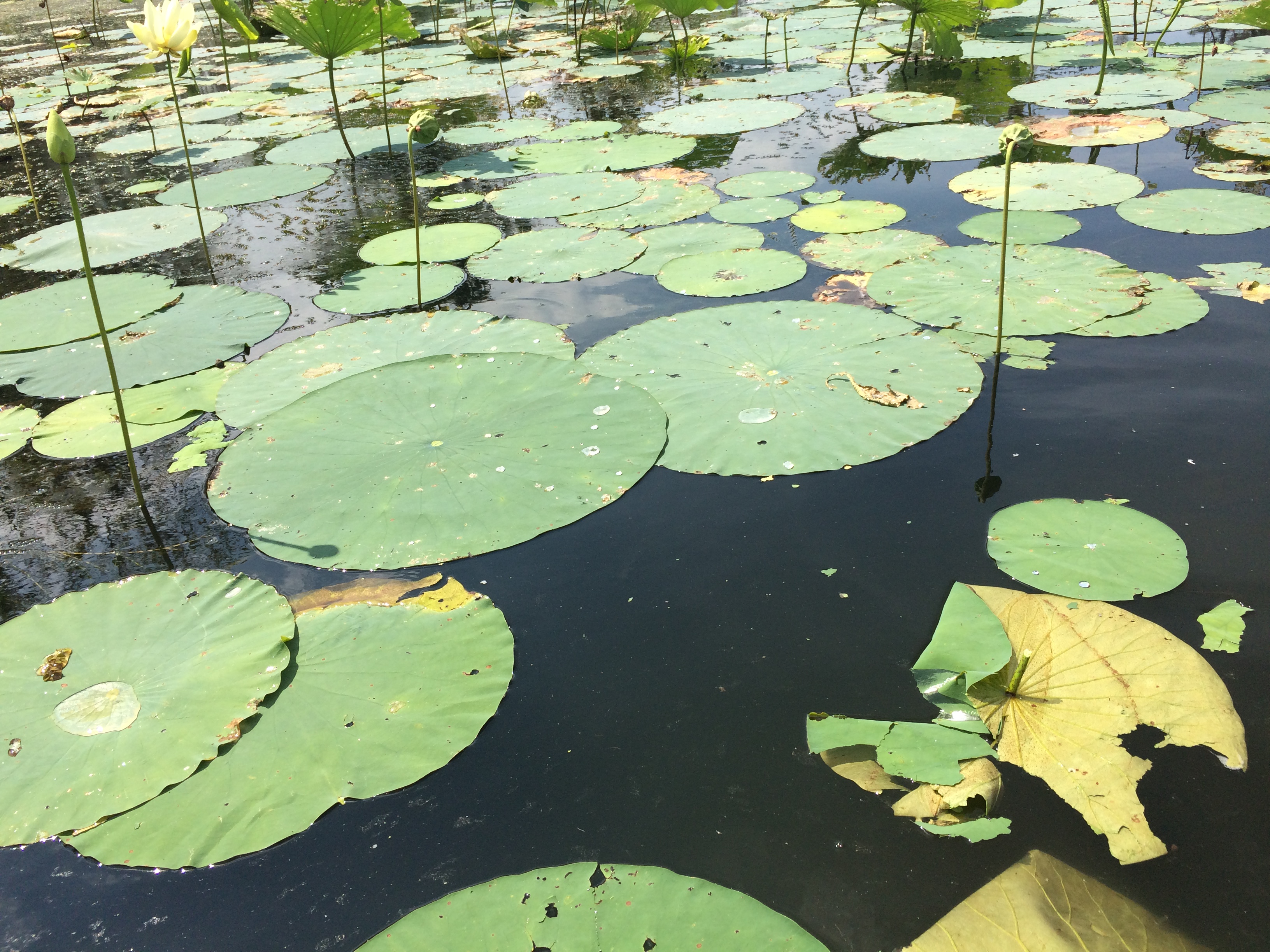 Some of these lily pads were at least 2.5 feet in diameter. Lauren and I were trying to come up with adequate analogies for them the entire time, and came up with “giant turntables,” or, for the ones that were sticking out of the water, half-way unfurled, perhaps gramophones. Except that Lake Martin (lily pads included) was almost completely silent…. 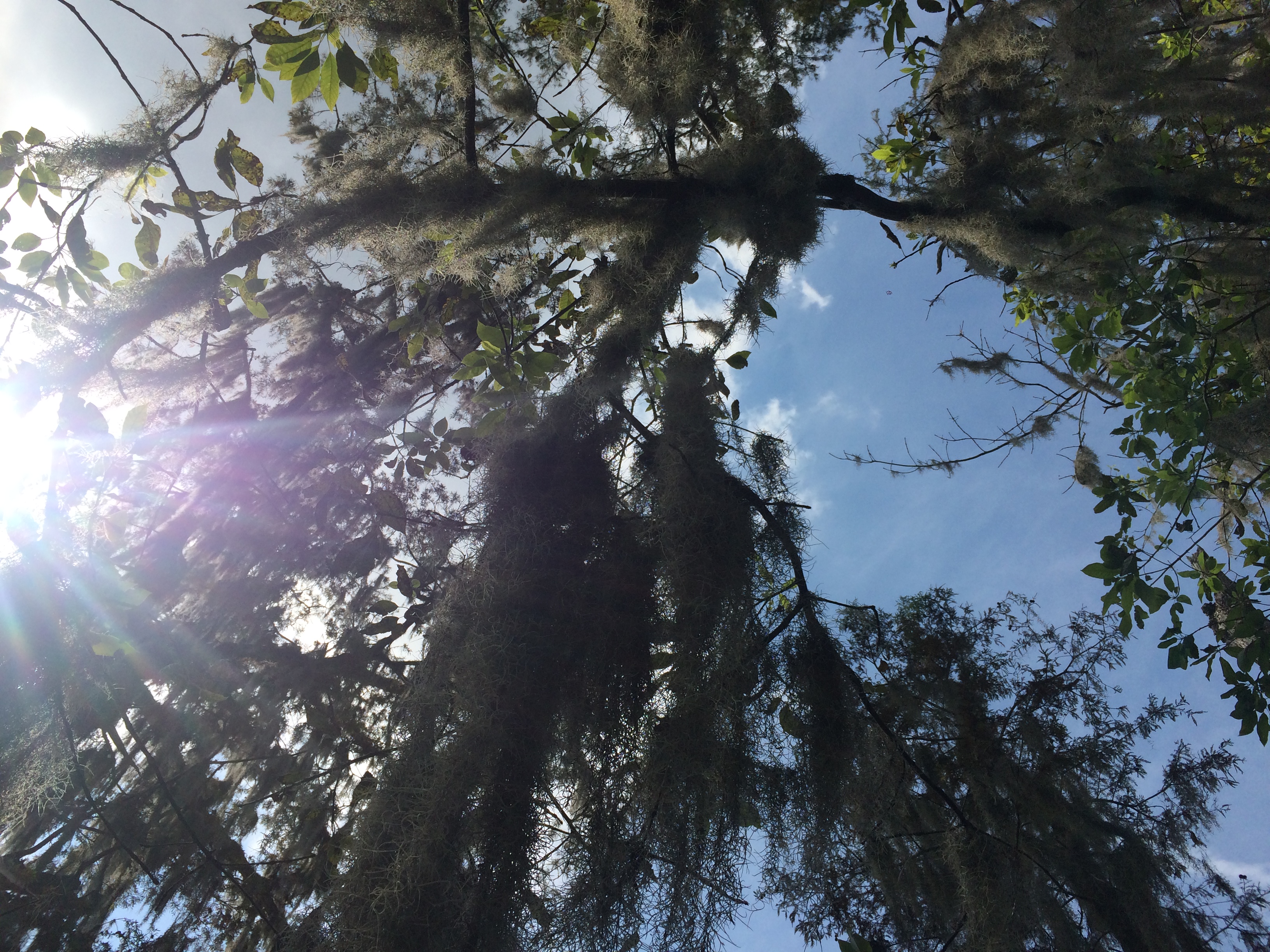 Looking up into the moss. 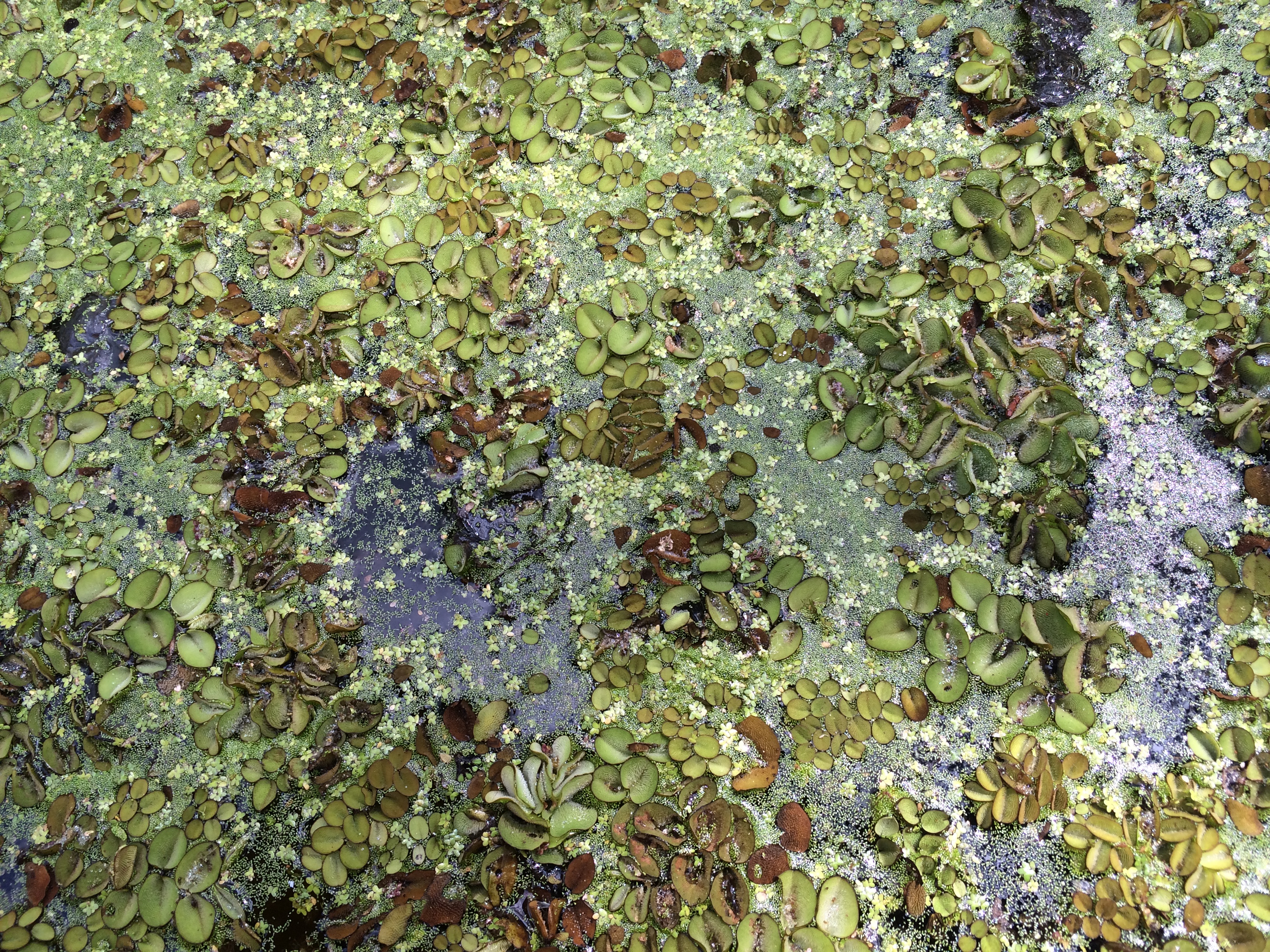 I believe they call this duckweed? Quite the constellation. Tiny frogs could be seen hopping from leaf to leaf…. 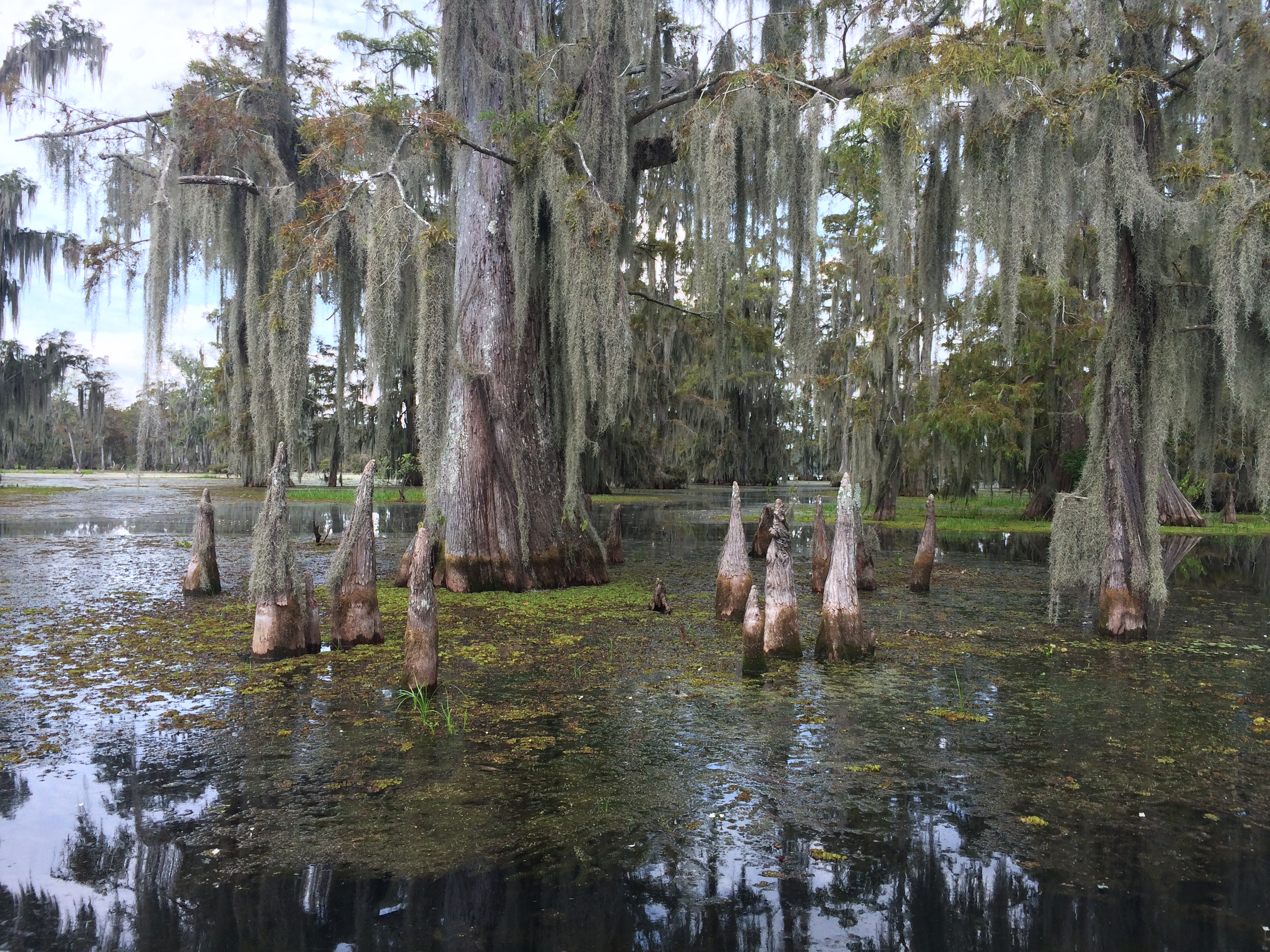 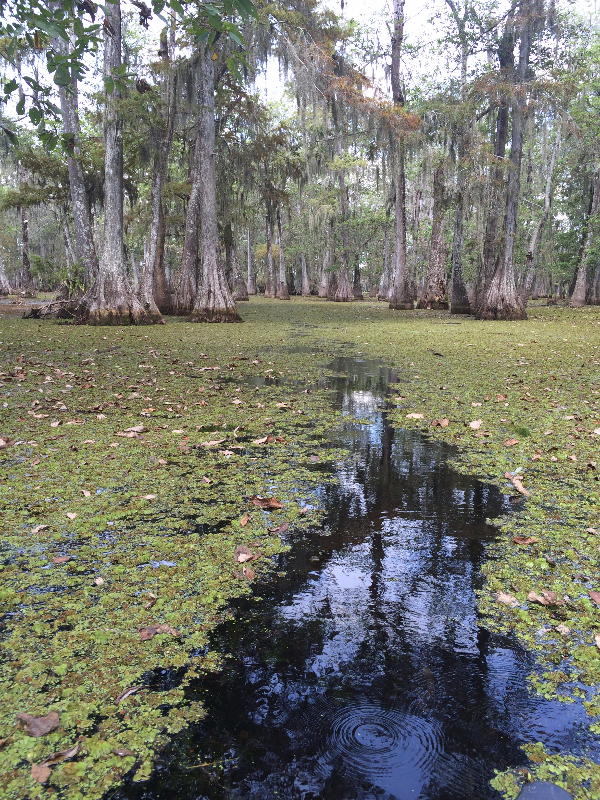 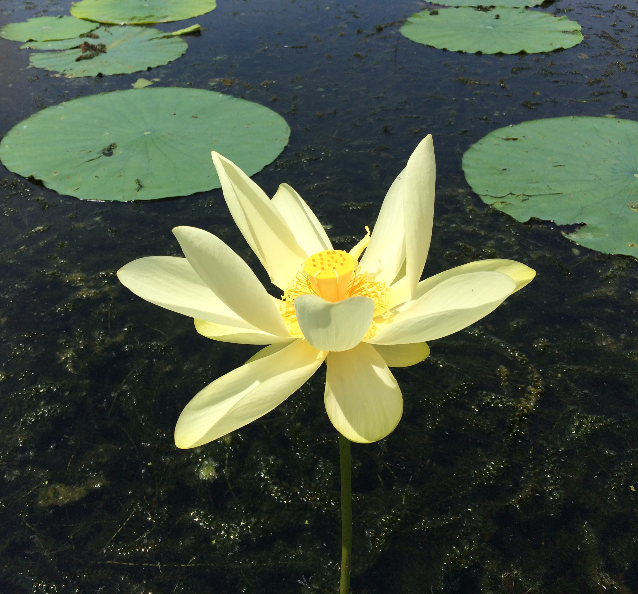 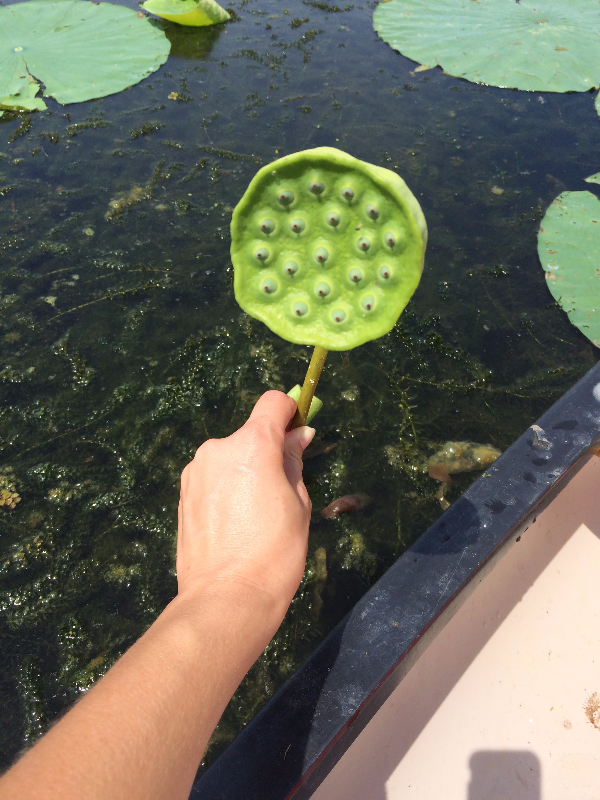 What happens when the blossoms go to seed. Inside those protrusions are large black seeds, which I imagine fall out and sink to the bottom of the lake, eventually spreading roots through the underwater muck. Oddly enough, these also look like antiquated sound/listening devices….or else alien shower heads.