If you didn’t get a chance to make it out to the 10th annual  Lafitte Greenway hike last Saturday, well have no fear! I took lots of photos and notes for you! 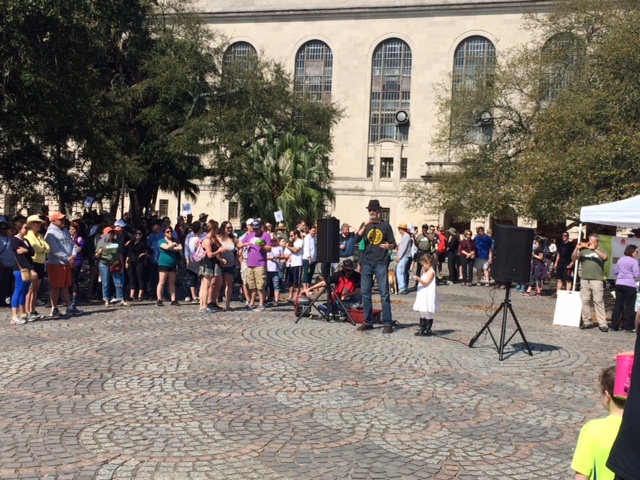 The hike of the recently-opened bicycle and pedestrian trail that follows along the filled-in bed of the old Carondelet Canal (the waterway that connected Bayou St. John to the edge of the French Quarter from the 1790s until the early 1900s) began in Congo Square, at 10am sharp. Hundreds of sunscreened people milled about and formed groups around volunteer tour guides. One of the founders of Friends of Lafitte Greenway, Bart Everson, gave a short speech—and soon enough, the groups were off!

After crossing Basin Street, named after the turning basin where the Carondelet Canal once culminated, we began strolling down the Greenway. Volunteer tour guide Kevin Centanni (who recently purchased the abandoned 10th Precinct Police Station near Delgado and is teaming up with Susan Spicer to open a restaurant in the renovated space, hopefully sometime in the next few months) told us all about the following fascinating features as we walked along: 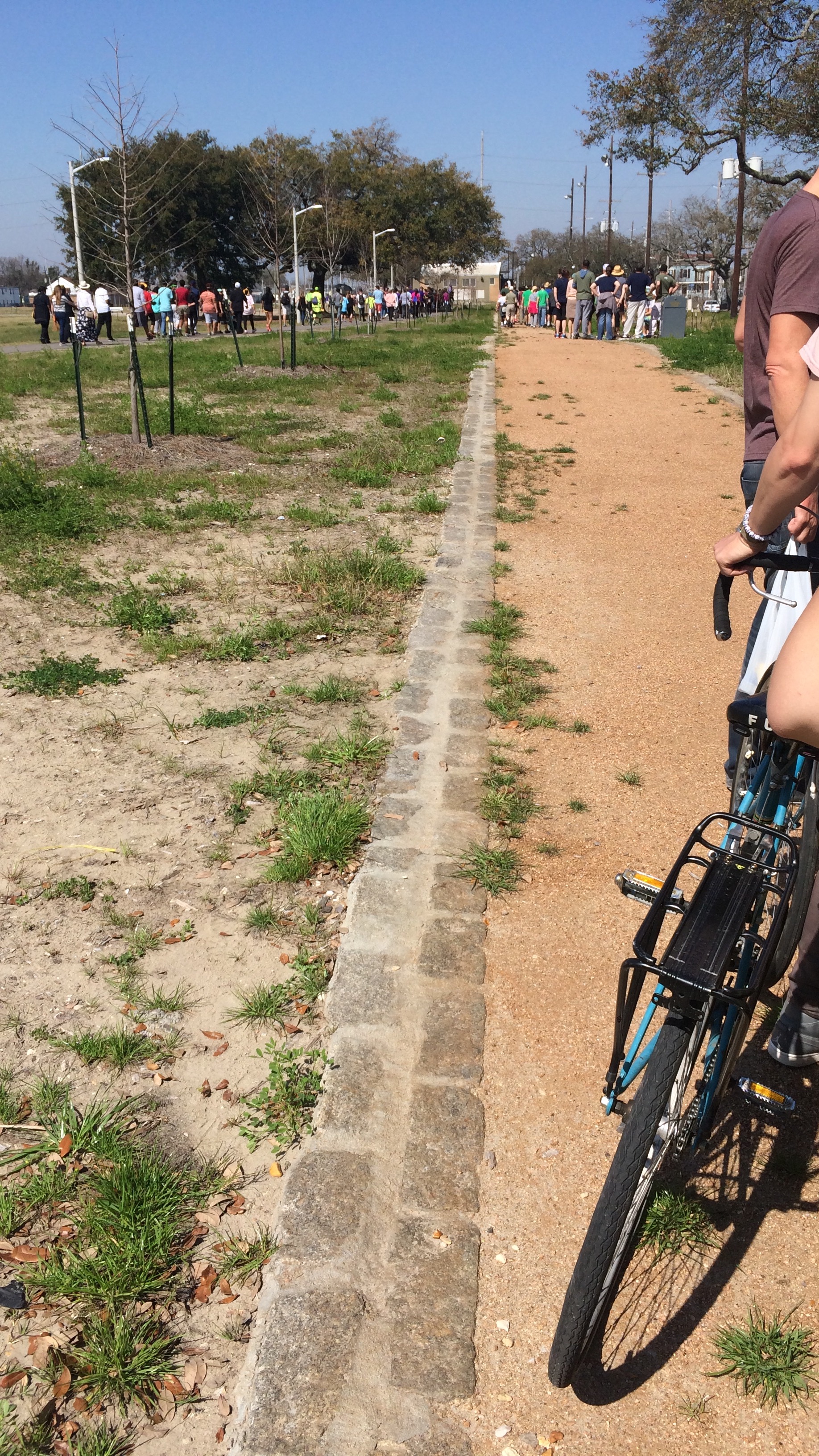 –The gravel path to the right of the Greenway, where the Lafitte Projects once stood, that gives a nod to the “lover’s lane” that once ran alongside the canal in its early days. City residents would escape the hustle and bustle of the French Quarter and stroll hand-in-hand along the canal, taking in the relative quiet and breathing in the fresh air. This pathway is lined with old stones reclaimed from foundations of demolished buildings that were once in the area. 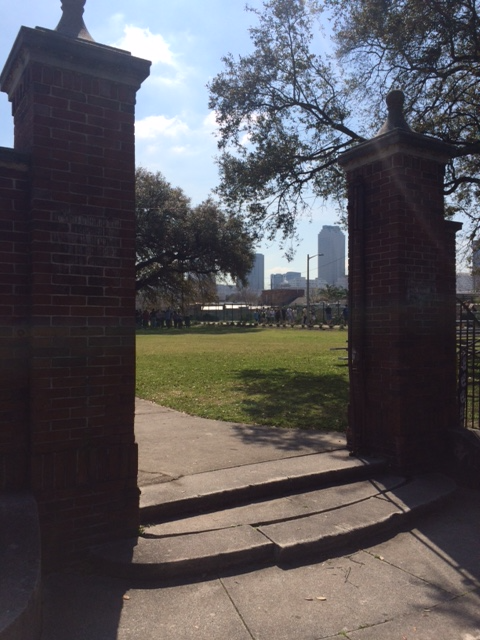 –The old brick posts that once marked the entrance to the Lafitte Projects. Centanni reminded us that Iberville and Lafitte were once sister housing projects of a sort—one for whites, and one for blacks—across the street from one another. 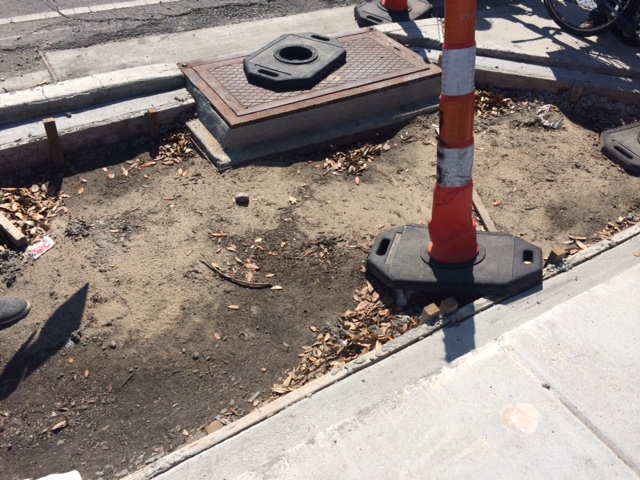 –A soon-to-be-finished storm water retention pond (among others along the Greenway). Eventually, the pond will hold rainwater and allow it seep back into the surrounding land instead of being pumped out into Lake Pontchartrain. 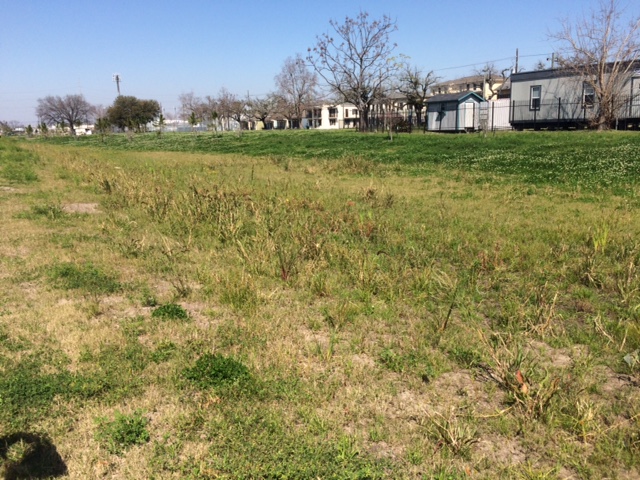 –Something called an “eco-swale,” which Centanni defined as a “ditch with the right kinds of plants in it.” I don’t know much about how these special ditches function yet, but the idea is to plant native species there in order to promote filtration of runoff into the surrounding land. 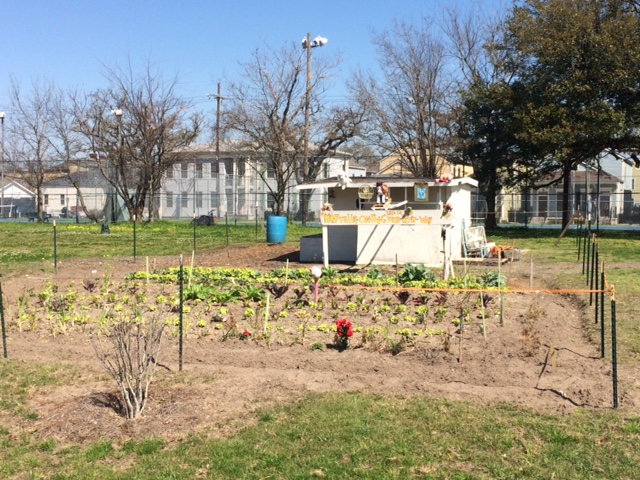 –Mr. Fred’s garden, one of the first along the Greenway, behind the Sojourner Truth Neighborhood Center. 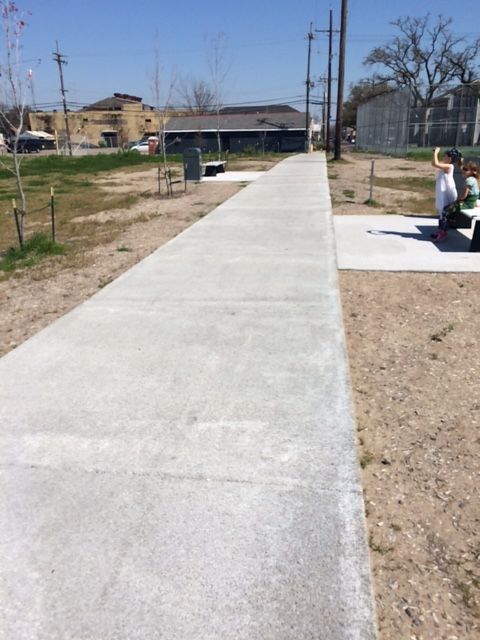 –An example of “permeable pavement,” which is just what it sounds like: pavement that allows water to seep through it so it can flow back into the ground instead of spilling off into streets and storm drains. 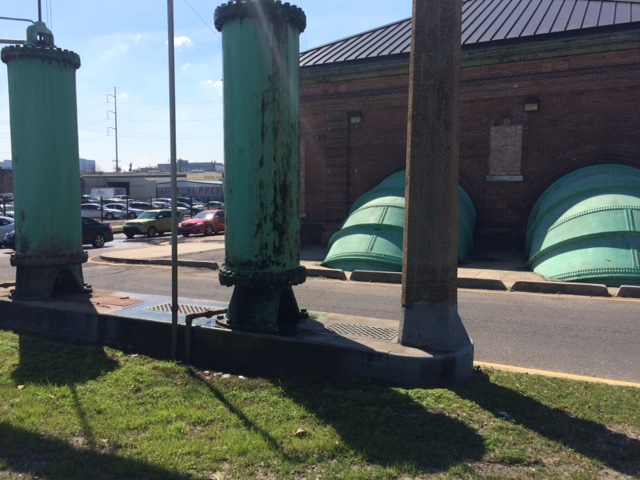 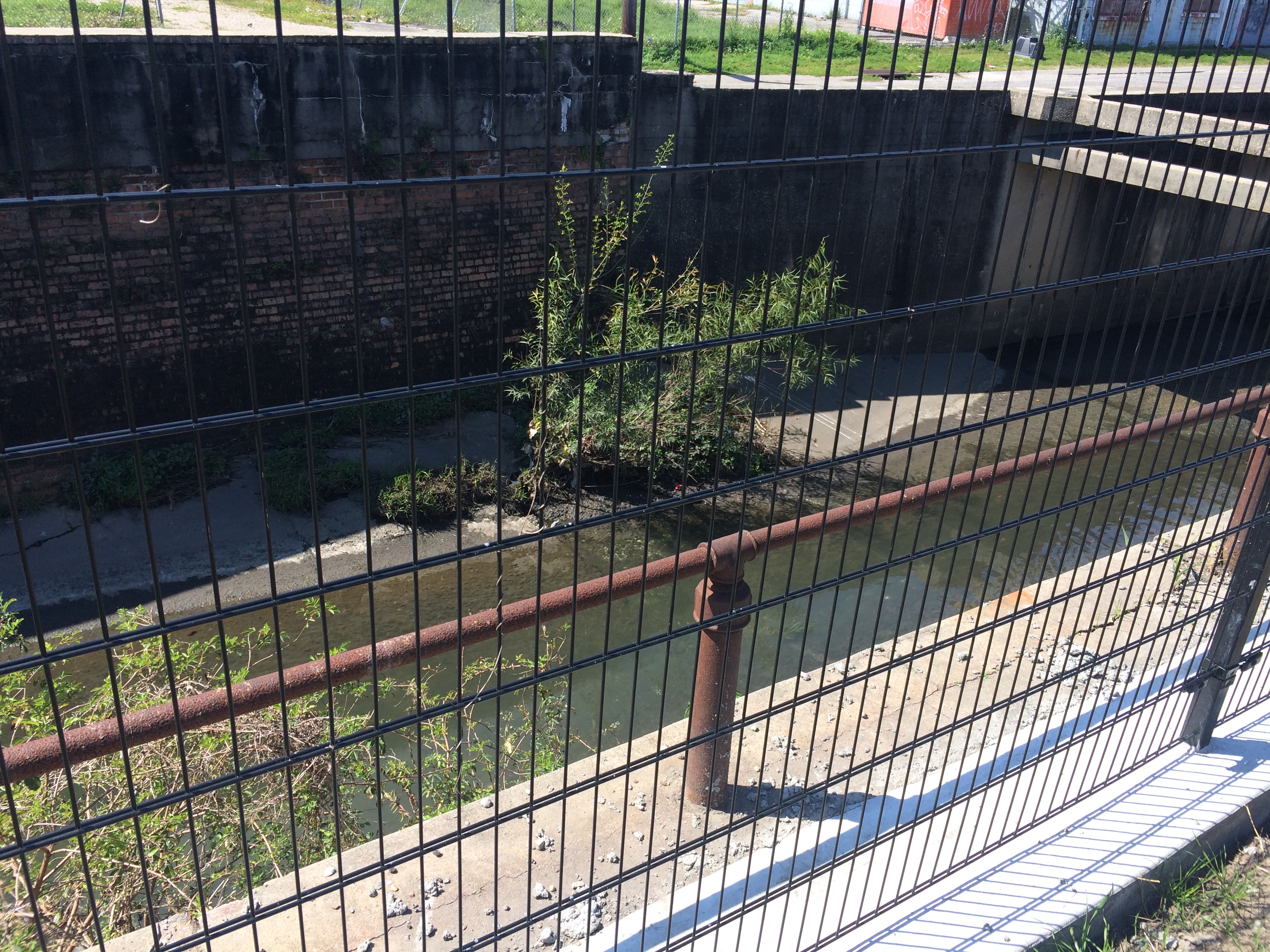 –The Broad Street pumping station and the open canal that empties into it, recently fenced off for pedestrian safety. 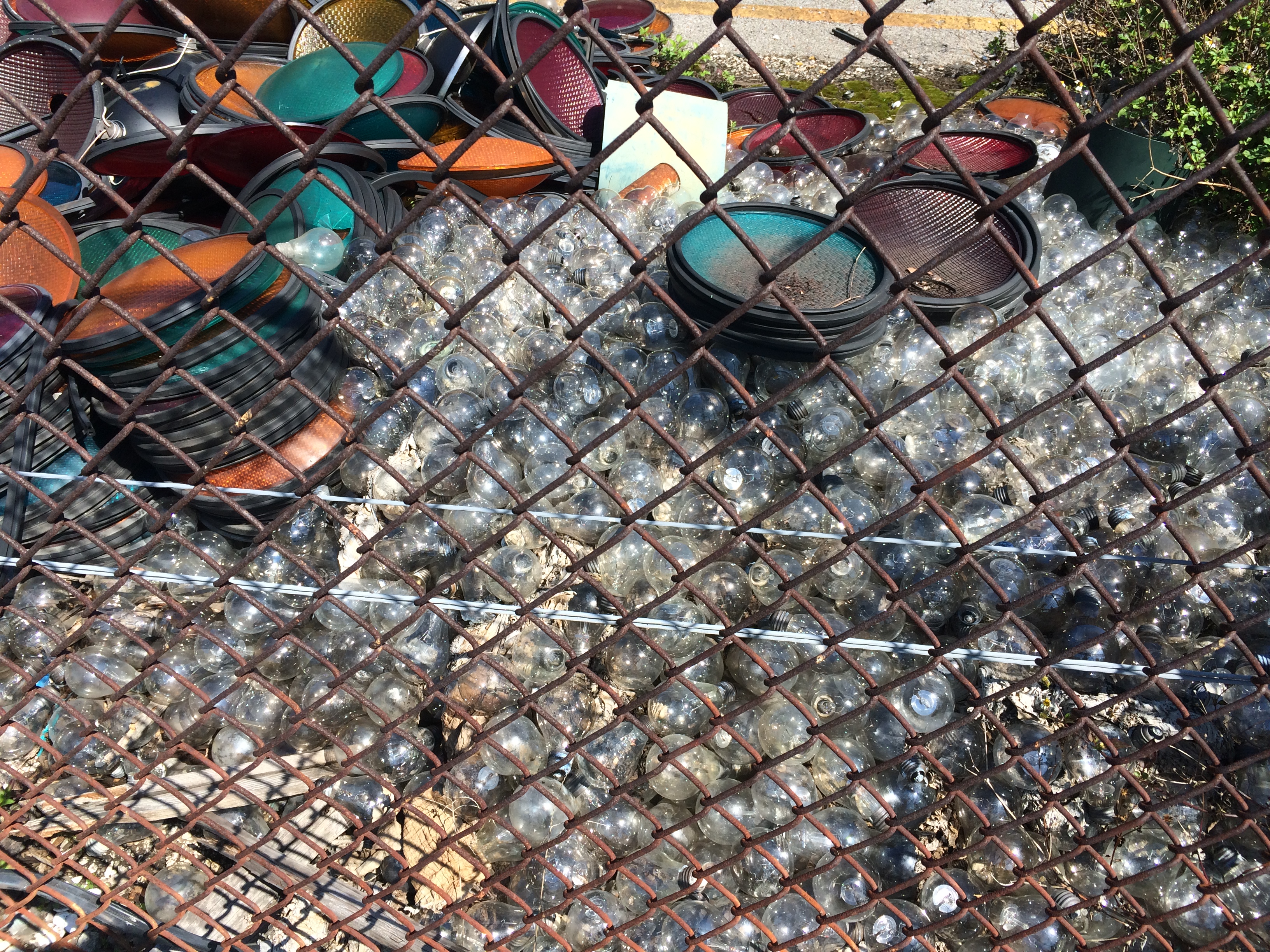 –The “stoplight graveyard” I mentioned in a previous blog post about the Lafitte Greenway (soon to be removed and turned into green space along the trail, says Centanni), where the city piles up broken stoplights and lightbulbs. Don’t the bulbs look like fish eggs? 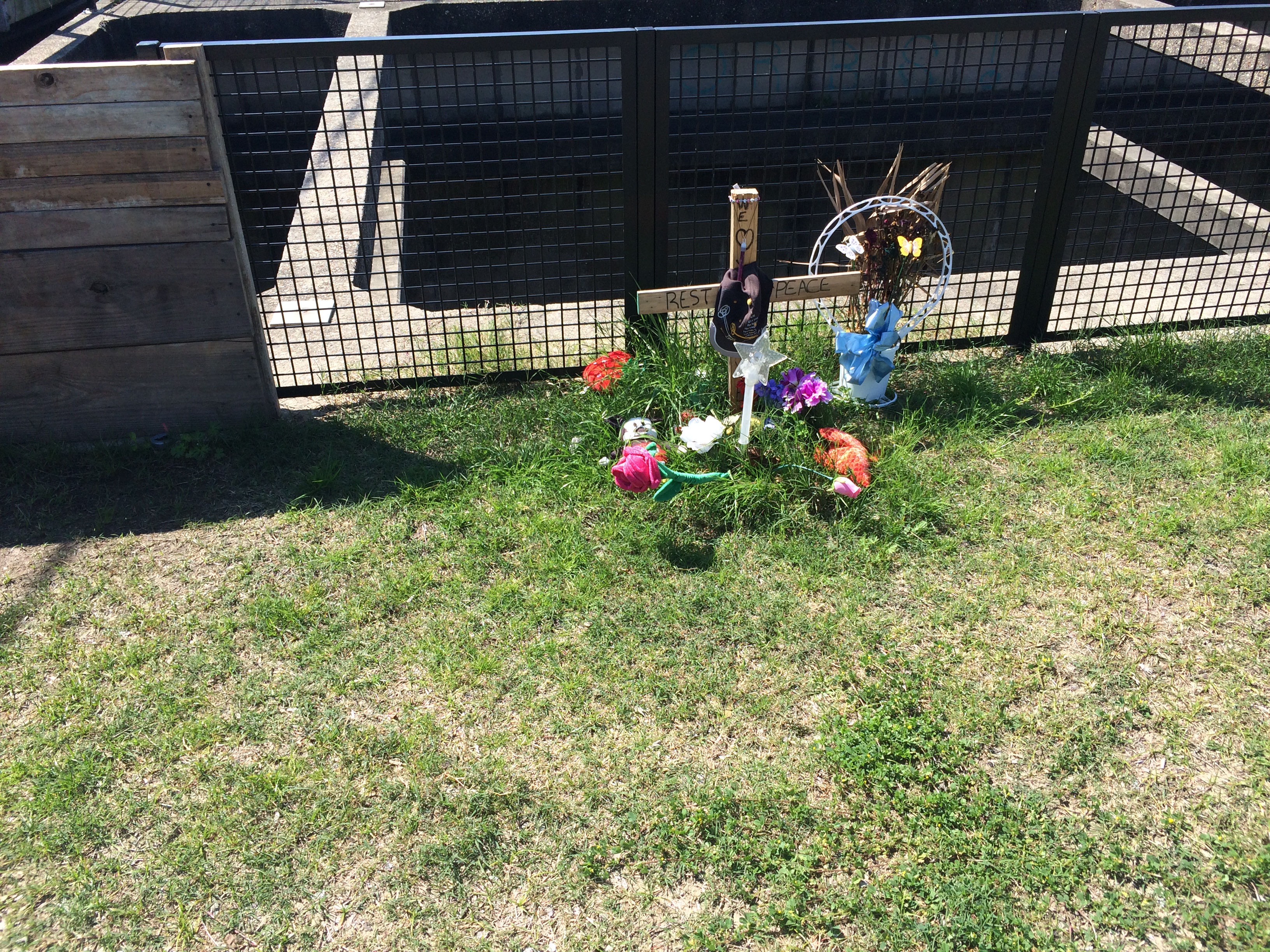 –The small memorial for David Lee Thompson, who died when attempting to cross a bridge over the canal running alongside the Greenway last December. The bridges have been fenced off to try and prevent people from using them, but they remain in place. 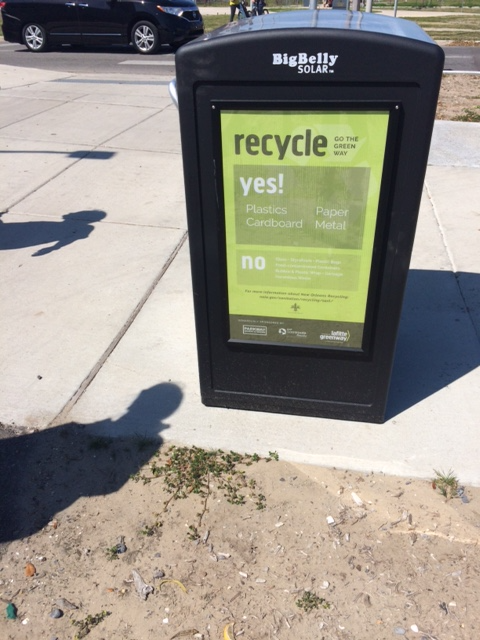 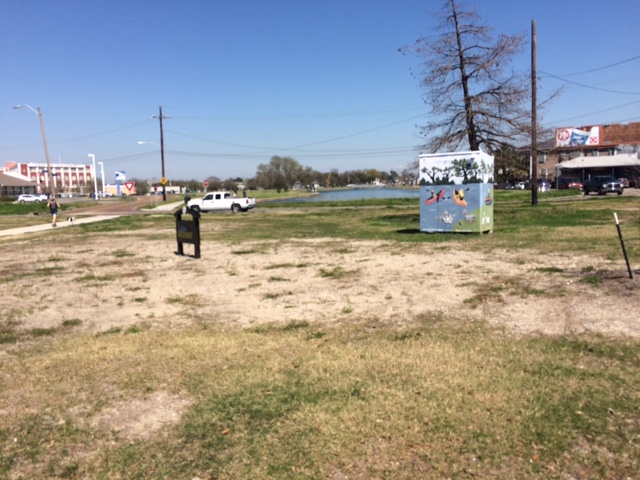 –Where the Lafitte Greenway passes below Bayou St. John: the spot where the bayou once flowed into the Carondelet Canal, where the top of the “L” met its bottom leg and shot off toward the Quarter. Well…it didn’t exactly shoot, but sort of trickled its way down there—often becoming clogged and impassable, exasperating residents and officials time and time again for decades. 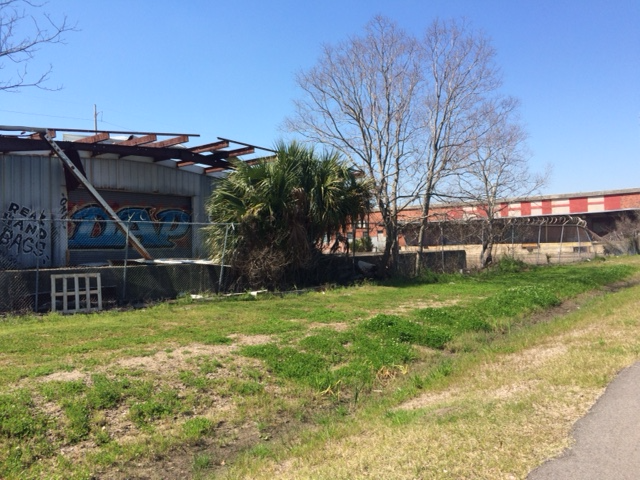 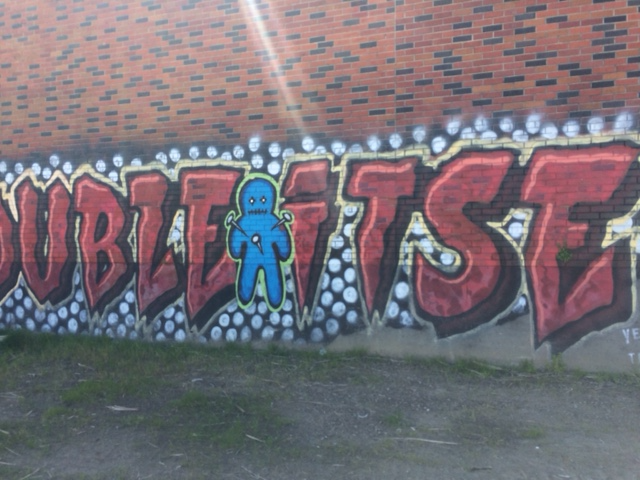 –Some pretty impressive graffiti along the side of a building on Torres’ property. 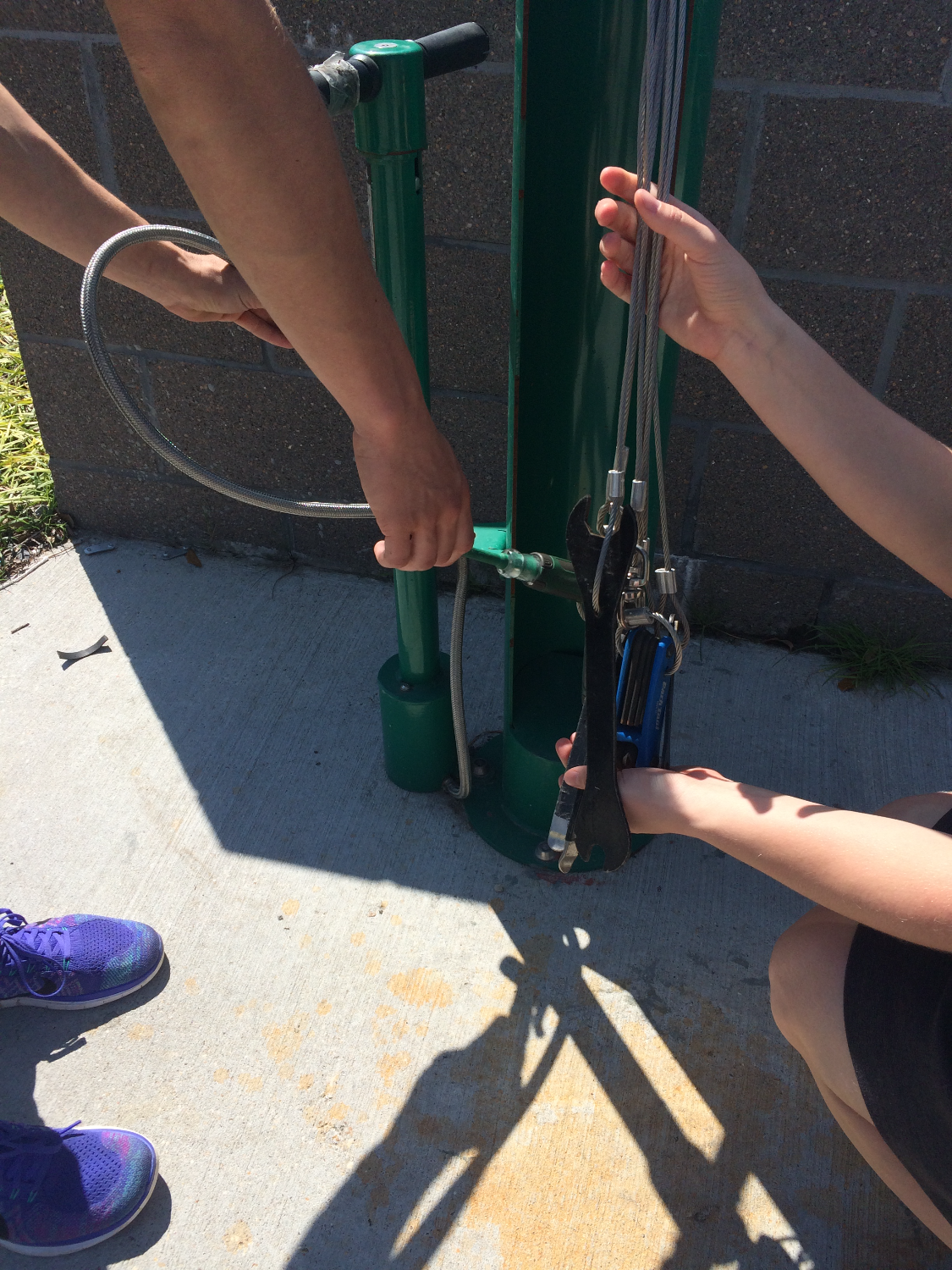 –A fully-equipped bike repair station (!!!) next to Winn Dixie along the Greenway. 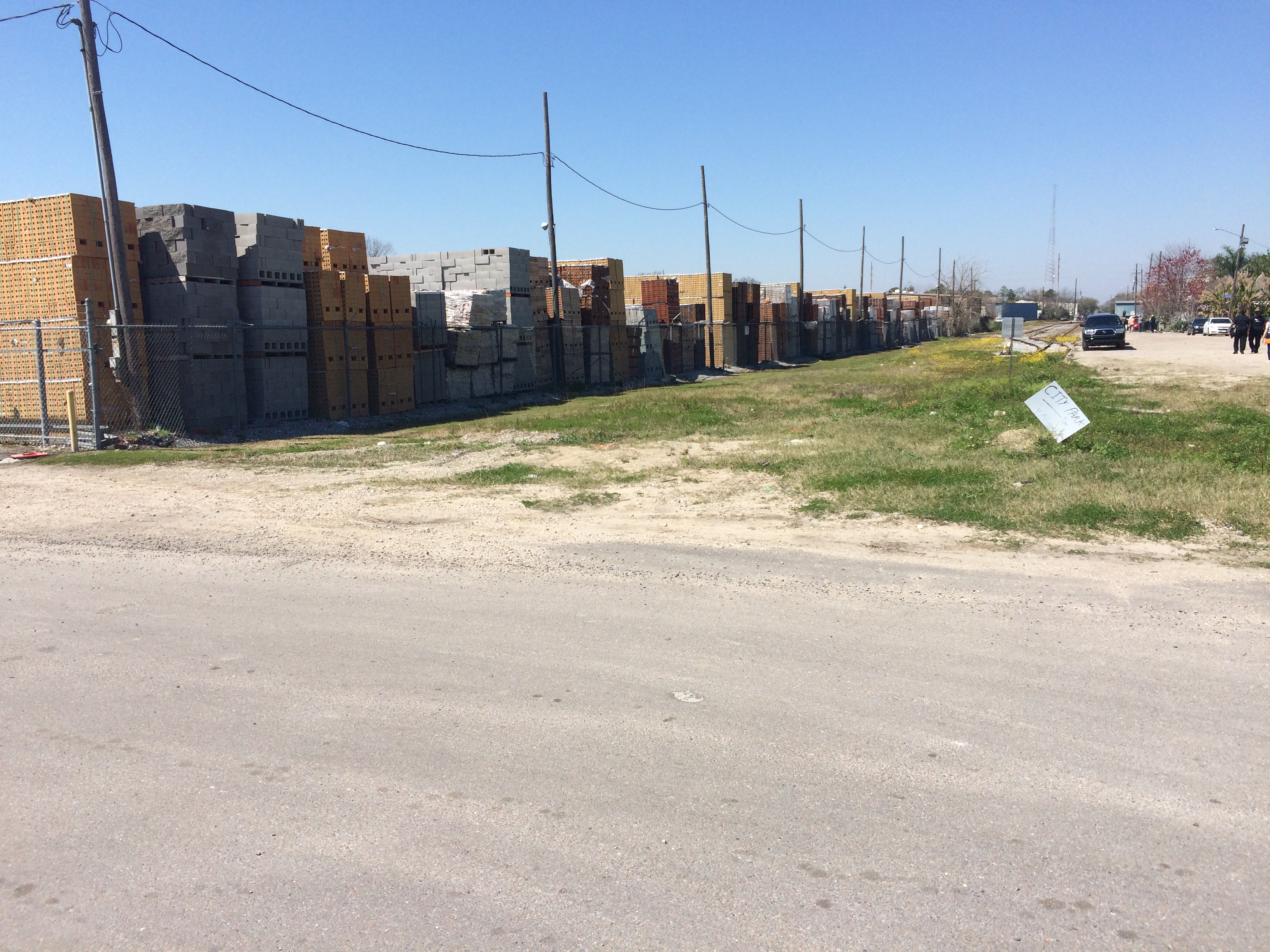 –Where the Greenway ends for the timing being, at N. Alexander Street. 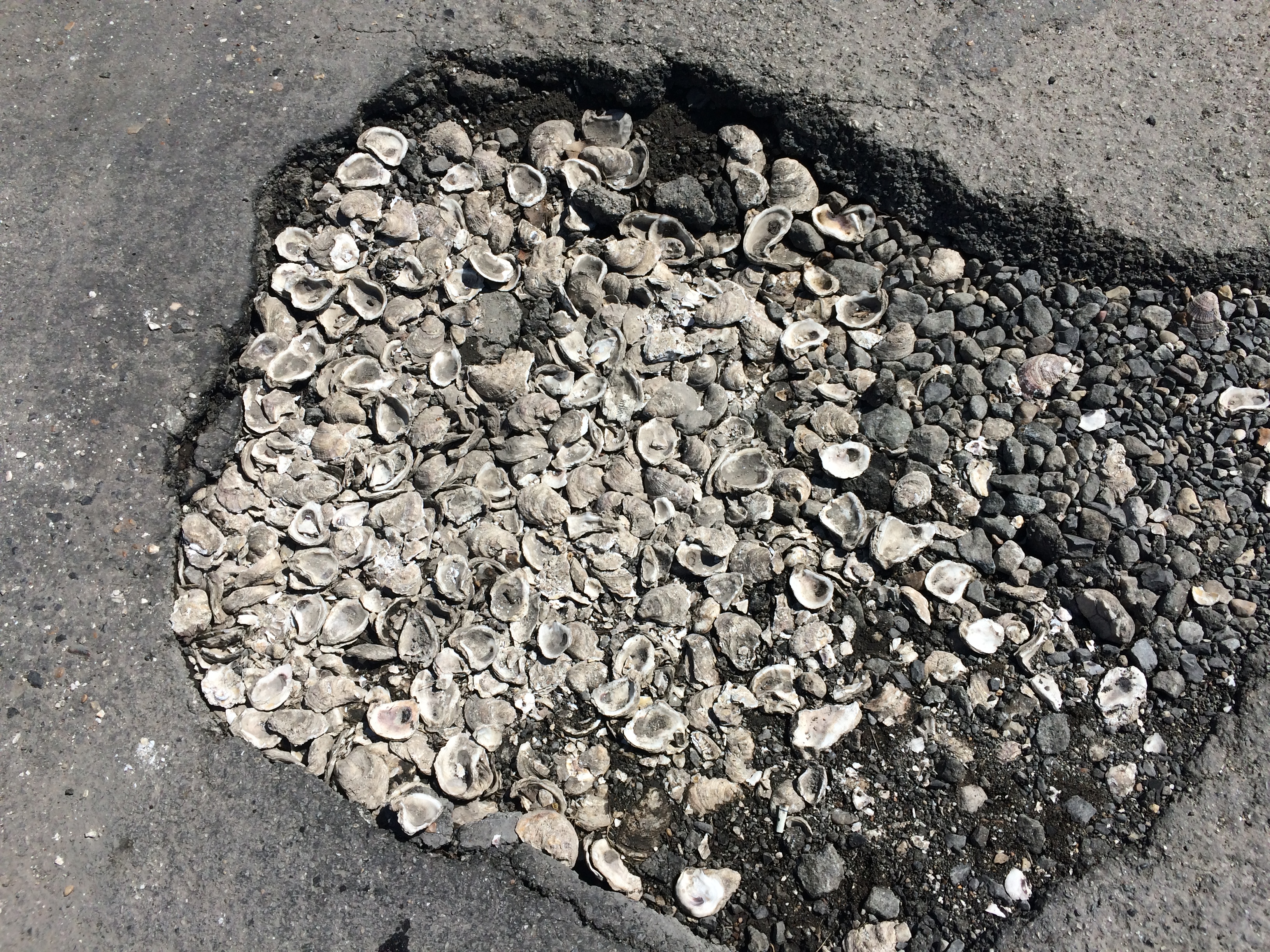 –A pothole full of clam shells that sets me musing about the shells’ possible connection to Indian middens found in the vicinity of Metairie Road…. 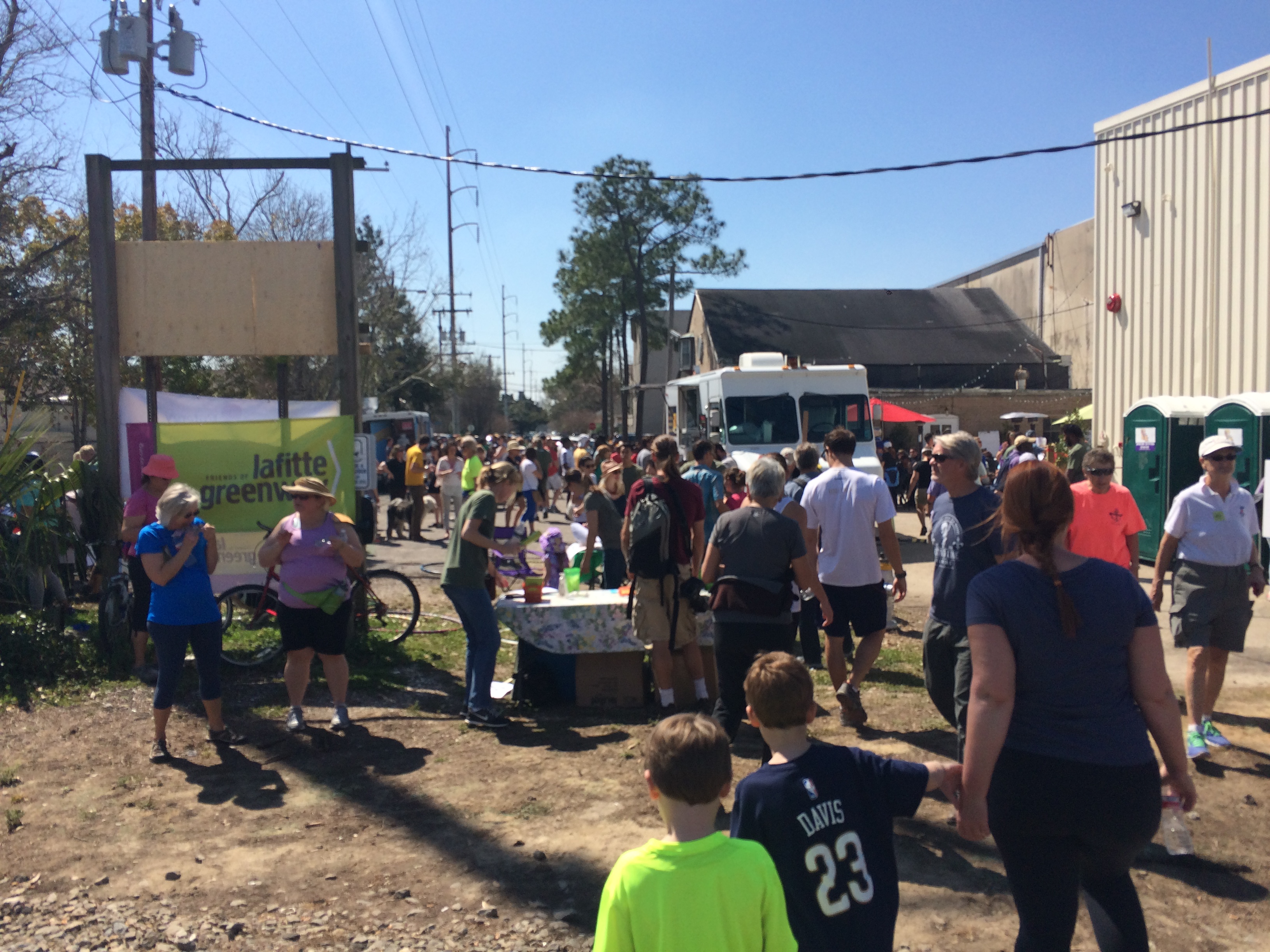 –And finally, the hike’s final stop at Second Line Brewing! It was a blast to hike the Greenway, learning about the corridor’s many-layered history as we walked along. If I missed anything, reach out and share! 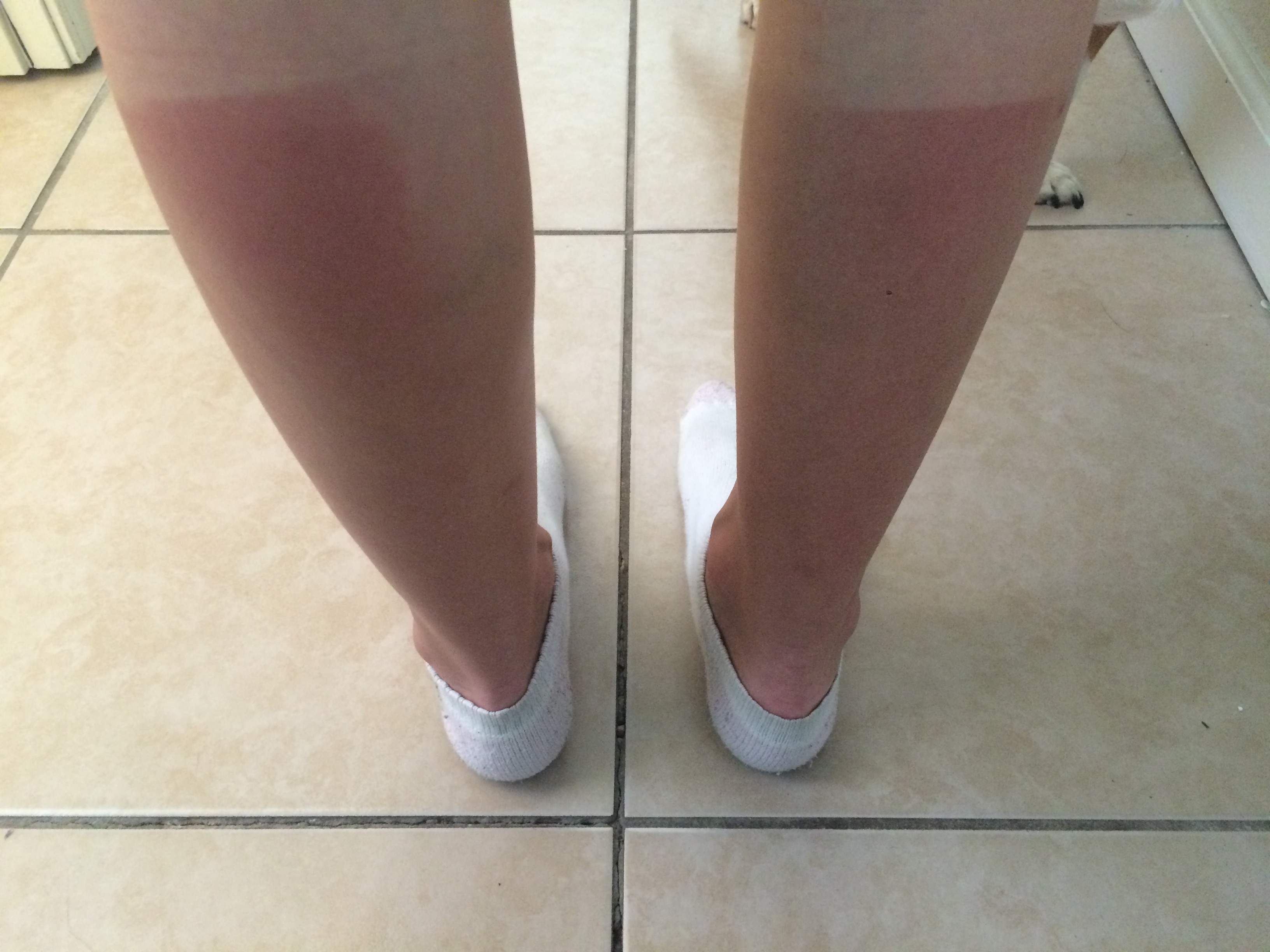 One more thing: you know how I mentioned those hoards of sunscreened folks preparing to set off in Congo Square? Well I was not one of them. As in, I did not wear sunscreen, and ended up with a mega legging calf-burn! Embarrassing, but too funny not to share!