Did you know that the historic, blue-tinted bridge spanning Bayou St. John across from Cabrini High School—colloquially referred to as the “Cabrini Bridge,” or Magnolia Bridge—has not always lived where it lives now? For decades, it spanned the bayou at Esplanade Avenue, serving as the last link along that bustling artery connecting downtown with City Park and Metairie Road.

Imagine how many thousands of buggy wheels have rolled across its stretch! How many clopping horse hooves and clattering streetcars!

In 1909, before upgrading to a significantly larger steel trunnion bridge, they unhooked the Magnolia Bridge from its foundations and floated it down to its present location on a barge. The original idea was to re-erect it across from Grand Route St. John, but the curve at that spot in the bayou rendered the location less than ideal. So the bridge was set down in its current location, where it began its second life as a key artery for residents of the surrounding neighborhoods until it ceased serving vehicular traffic sometime in the middle of the last century.

The re-location of the old Magnolia Bridge in 1909 went off without a hitch, but the same cannot be said about the construction of the new bridge at Esplanade that same year. On May 19, 1909, the Times-Picayune reported that during a routine test during the bridge’s construction, “With a terrific crash, the span of the steel bascule trunnion bridge in course of construction at the Esplanade Street end, crossing Bayou St. John, snapped in twain, and the heavy superstructure fell into the bayou, effectually closing navigation of that waterway for some time to come. Five men were injured, one of them, Frank Cunningham, fatally, two others severely and two slightly….”

Frank Cunningham, originally from Oklahoma, Mississippi, was only 24 years old. Newly married, he had been living in New Orleans for eight years doing iron and steel work. When the new bridge “snapped in twain,” Cunningham “was struck on the head by a piece of iron…and, falling, the base of his skull was fractured. He lay there unconscious until he was carried to Picdeloup’s saloon, opposite, remaining there until the ambulance arrived and took him to the hospital.” [1]

The rest of the new bridge’s construction saw its fair share of mishaps and delays, even once repairs were made. In fact, its entire existence was besotted by inefficiencies, closures, and repairs. All in all, it seems our Magnolia Bridge was far more trustworthy—not to mention older and more unique.

This just goes to show you that a bridge, in all its day-to-day stillness, can be far more than it appears to be.

Given the recent rejection of a property tax by New Orleans residents to help fund firefighter  backpay, I figured I would focus on a little-known historical landmark on the bayou’s shores.

Rumor has it Bayou St. John is home to the oldest fire hydrant still standing in the city of New Orleans. (If you know of an older one, tell me where it is!)

This proud little dude stands at the corner of Grand Route St. John and Moss Street, and according to his markings, was installed on September 14, 1869. It’s an example of a “Birdsill Holly” hydrant, named for its inventor. Until 1891, the fire department in New Orleans was purely volunteer-run; for 62 years, the Firemen’s Charitable Association sought to protect the city of New Orleans from “conflagrations,” and was organized into several “companies,” or groups, each with their own engine.

Apparently, around the time of our friend’s installation, spectators would gather around to see which engines could “throw” water the farthest. In 1876, four engines were competing for the record: Creole No. 9, Mississippi No. 2, Crescent No. 24, and James Campbell No. 7. No. 7 was by far the reigning champion, having thrown 320-feet-2-inches, until a final contest was called for June 25, 1876, on the banks of Bayou St. John.

The Times-Picayune reported: “At a late hour of the night the decision of the judges on the engine-throwing match, was received, and Mississippi No. 2 once more is proud to be the winner of the champion horns. The match was for $100, through 100 feet of hose, and came off near the Magnolia Garden, on Bayou St. John.” [1]

We don’t know how far Mississippi No. 2 was able to throw that night, but we know she was the winner. Is it possible our Birdshill Holly hydrant supplied the water for such an occasion? Magnolia Gardens, after which Magnolia Bridge (a.k.a. Cabrini Bridge) was named, would have been fairly close by….

In my travels researching this hydrant, I came across this photograph of a carving in Cypress Grove Cemetery—featuring none other than “No. 2,” our reigning champion!

Well, I don’t know that for sure, but given the 19th century origins of this carving and the fine reputation of the Mississippi No. 2, one can only assume. Someday, I will go check it out for myself. For now, I will content myself with visiting Mr. Birdshill (he told me to call him “Birdie” for short) on the banks of my favorite bayou…. 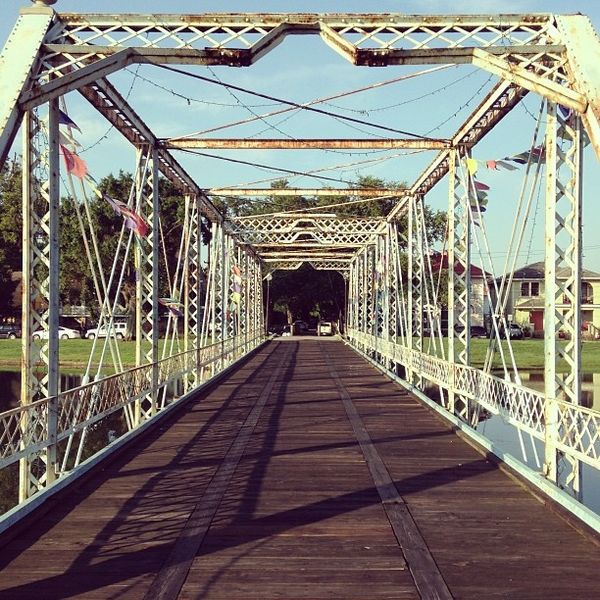