October 22, 2015January 6, 2018
First of all, I want to thank ViaNolaVie​ for including my bayou blog posts on their site going forward! I am honored to be presented alongside the stories of exceptional quality NolaVie consistently offers on life and culture in our fair city. I will be writing, from here on out, bi-weekly posts on what I’ve been learning while researching the history of the Bayou St. John—“field notes,” if you will—much as I’ve been doing over the past few months.

This week, I will be talking about Native American shell middens again—because they’re so incredibly cool, and because, as I learn more about the prehistory of our area, I’ve come to realize shell middens are even cooler than I initially thought….

Because, here’s the thing: we know so few specifics about Native American life in this particular region before the end of the 17th century. Between when the first European “explorers” traveled up the Mississippi in the mid-16th century and the second wave of “explorers” came to the region more than one hundred year later, European-borne diseases had already ravaged the local Native American population. For reasons we aren’t entirely sure of—intertribal warfare, and/or other consequences of French arrival—tribes were moving around incredibly quickly, and generally changing their habitation and subsistence patterns in drastic ways by 1699. But accounts by these later European explorers are the only written descriptions we have to go on: questionable vocabulary, snippets of detail about post-contact native life, and virtually nothing reliable on pre-contact native life at all. We can learn a lot from archaeological evidence, of course, but most of that has been destroyed in the New Orleans area. So, we are left to imagine….

and talk about shell middens.…

and look at the patterns that emerge when we consider the landscape. Those of us in New Orleans happen to live upon a very unique and dynamic landscape. A landscape with very specific resources and challenges—an example of what happens when an alluvial river (the Mississippi) sweeps its arm out and encloses a little circle of the sea (Lake Pontchartrain). Obviously it’s a bit more complicated than that, but my point is we live in what they call a “deltaic coastal” natural system: Lake Pontchartrain is an estuarine ecosystem, thought to be one of the richest and most diverse kinds of ecosystems on the planet, and, until we “tamed” the Mississippi, the land along and below Lake Pontchartrain was constantly moving and changing according to the river’s proximity. By considering the natural system we live in, in combination with the archaeological evidence we find here, we can make certain broad (very un-nuanced) guesses about Native American movements and subsistence habits in the region.[1]

I’m still trying to get a grasp on the different fields that explore the intersection between human history and landscape (geoarchaeology and historical ecology, to name a couple): the vocabulary used by scholars in those fields, how the fields have grown and changed over time, etc. But my heart was pounding with excitement reading an essay called “Geoarchaeology of the Northern Gulf Shore,” by Sherwood M. Gagliano. In it, one finds terms like:

Among many other things, we learn from Gagliano what it means when archaeological deposits are found on top of (vs. “interbedded” into, or foundbehin​d) natural levee surfaces: the deposits must have “accumulated after the distributary had been abandoned as an active course of the parent stream.” [3]

Meaning, when we find a shell midden on top of a ridge that was formed by a former path of the Mississippi (as in, shell middens found on the Metairie-Gentilly Ridge, for example, near the bayou), we learn that people must have lived on this ridge once it had fully matured. Meaning, Native Americans probably utilized the high ground of the ridge after the Mississippi had already swung south, leaving a mere trickle of itself behind. This trickle would have been perfect though! It would have been a great means of transportation to the overland portage that led to the current trunk of the Mississippi River, as well as to the mollusk-strewn shores of Lake Pontchartrain. The ridge would have allowed access to both brackish and fresh water, but wouldn’t have presented much of a flood risk. Also, the archaeological site that was discovered (more details to come) near where the bayou meets Lake Pontchartrain would have been an ideal coastal location as well.

If most of the middens in the area around the bayou are gone now, however, how are we sure they were ever there? Well, for one thing, we have some folks from yesteryear who tell us about them, like this guy, John W. Foster, writing in 1874:

“These shell ridges and occasional mounds are very numerous near the city of New Orleans and along Lakes Pontchartrain and Maurepas, and on the small bayous that pass from one into the other….Shell-mounds and shell accumulations abound along the Metairie, the Gentilly, and the lake-shores, but none along the Mississippi…. Along the banks of [Bayou Barataria] are vast shell accumulations, which for years, like the others I have named, have been used for street grading and garden-walks in New Orleans….this trade is fast exhausting these supplies.”[4]

There ya go. For years, Metairie Road was called “The Shell Road,” or “The New Shell Road,” and was paved with white clam shells quickly turning to dust beneath mule hooves and wagon wheels. They were probably the remains of shell middens, shoveled and dispersed and made smooth. (In more recent times, we dredged shells from Lake Pontchartrain for construction purposes, so not all the shells you see scattered about New Orleans are from middens, alas).

Ok—last but not least—the highlight of the last couple weeks:Jean Lafitte National Park, located south of New Orleans in the Barataria Preserve. Although I’ve been there a few times before, here is what I discovered on my most wonderful last visit: 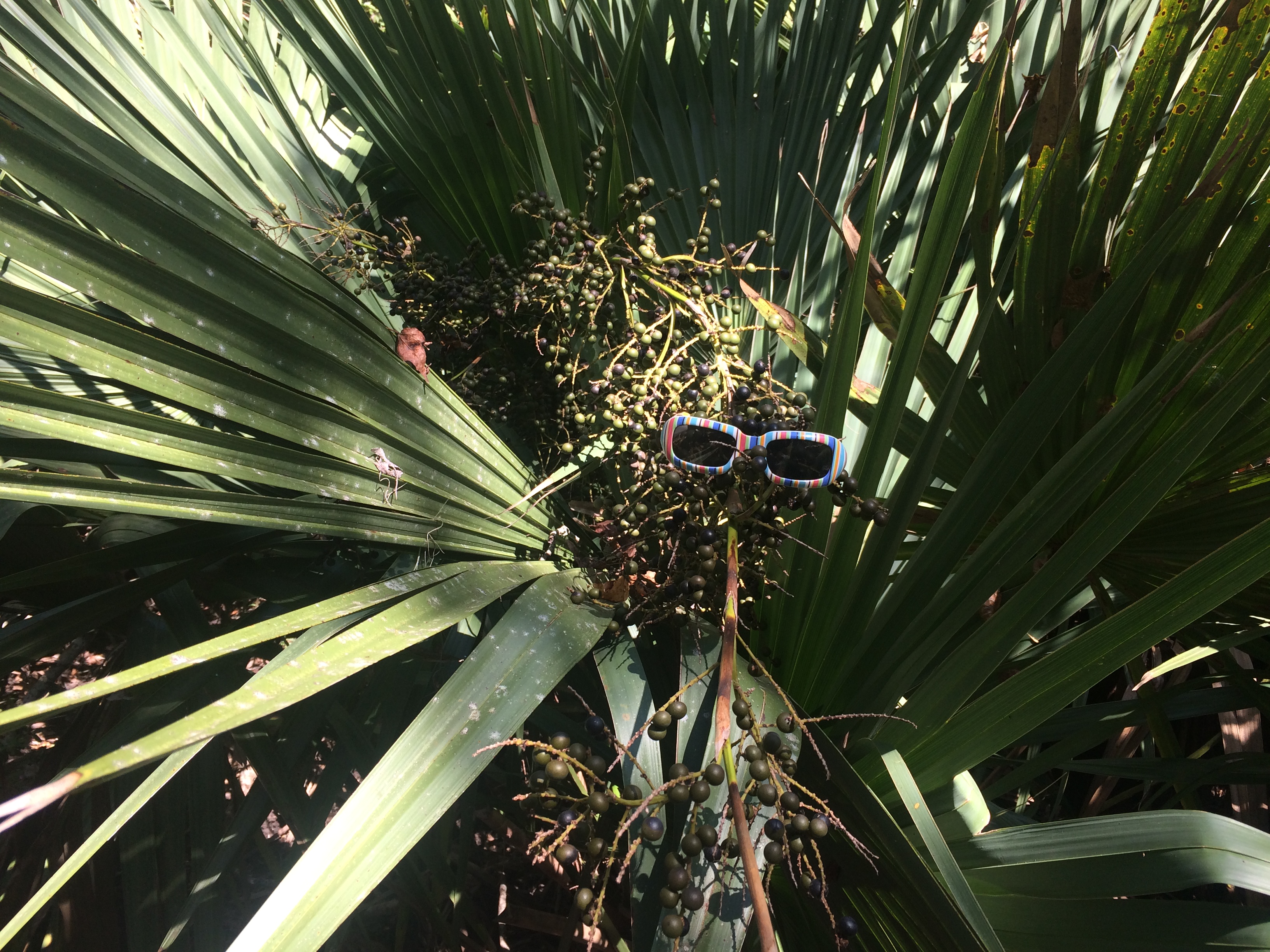 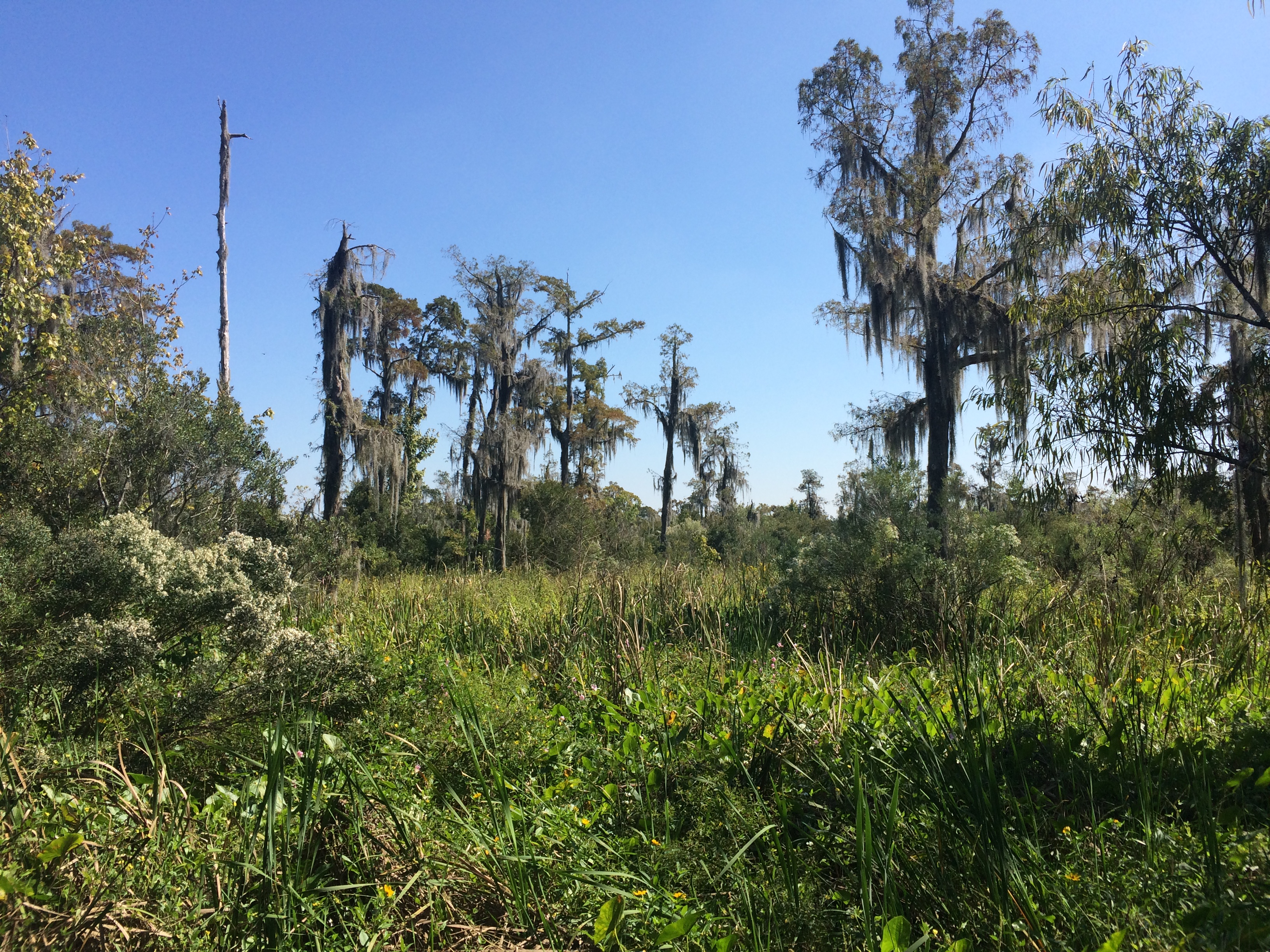 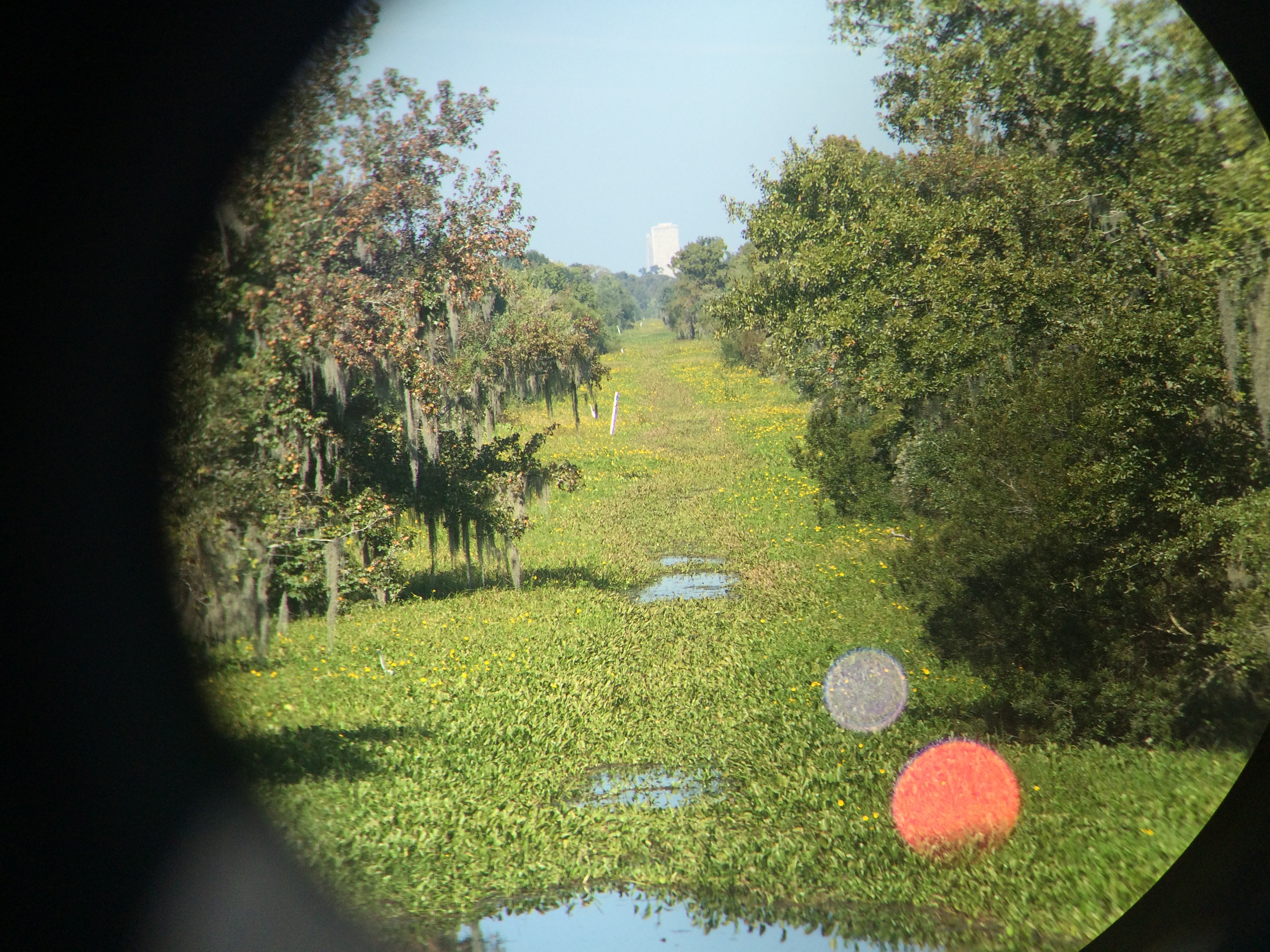 Awater-hyacinth-choked manmade canal (water hyacinth is an invasive species that also clogged Bayou St. John in the 20th century). Can you spot the white building looming at the end of it? This photo was taken my pressing my iPhone against the eye piece of high-quality binoculars. 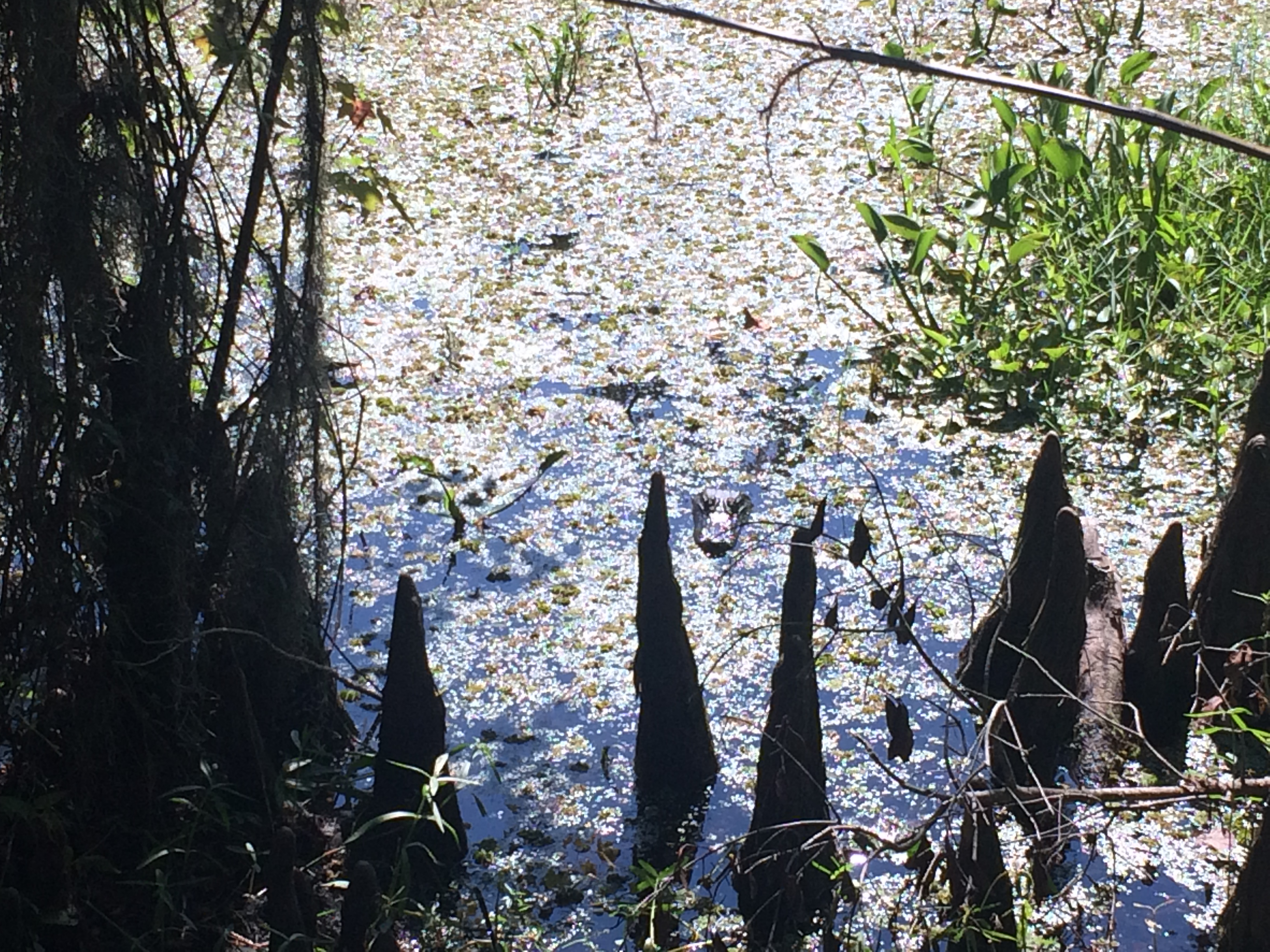 A baby alligator (can you spot it??). 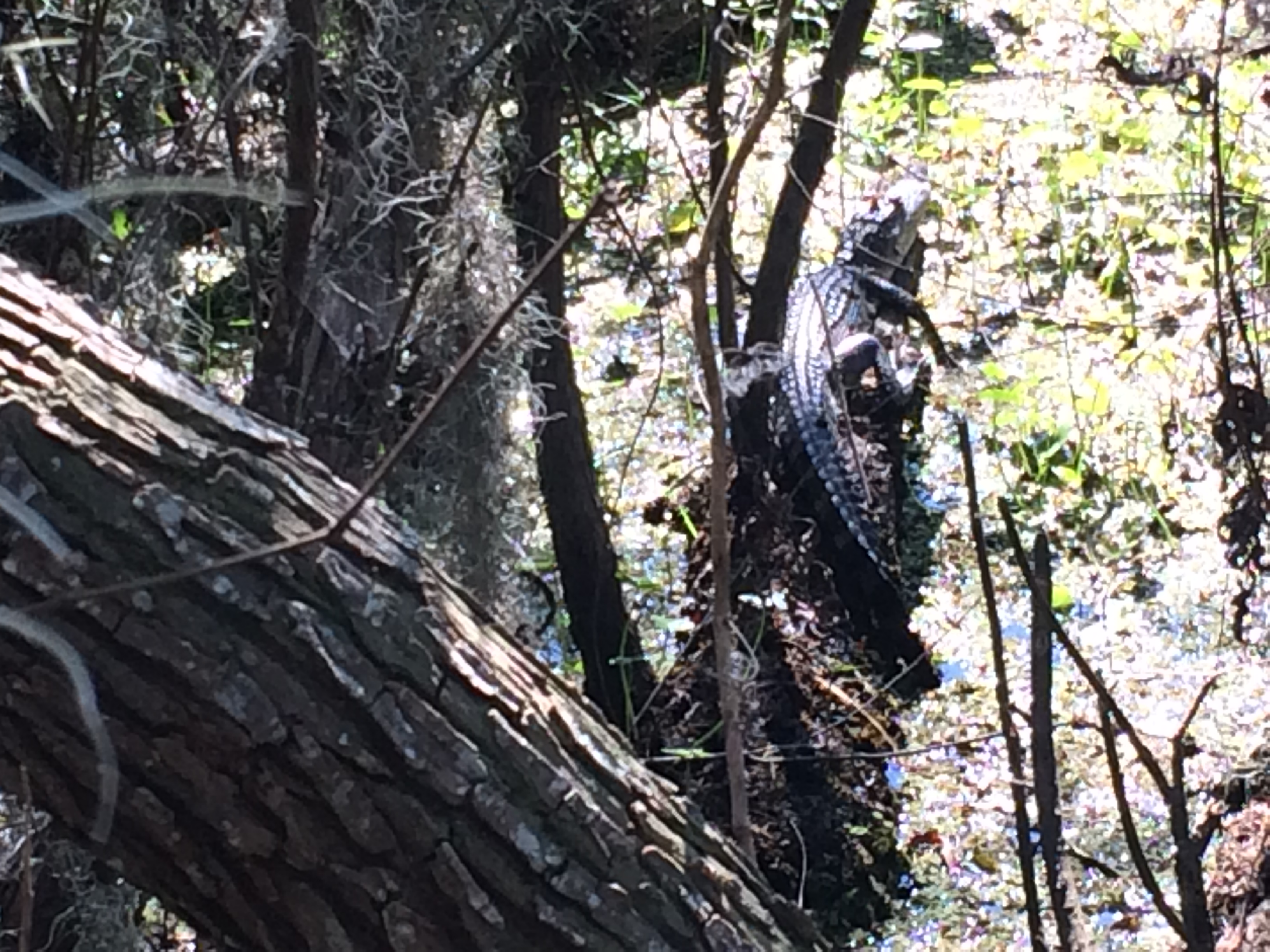 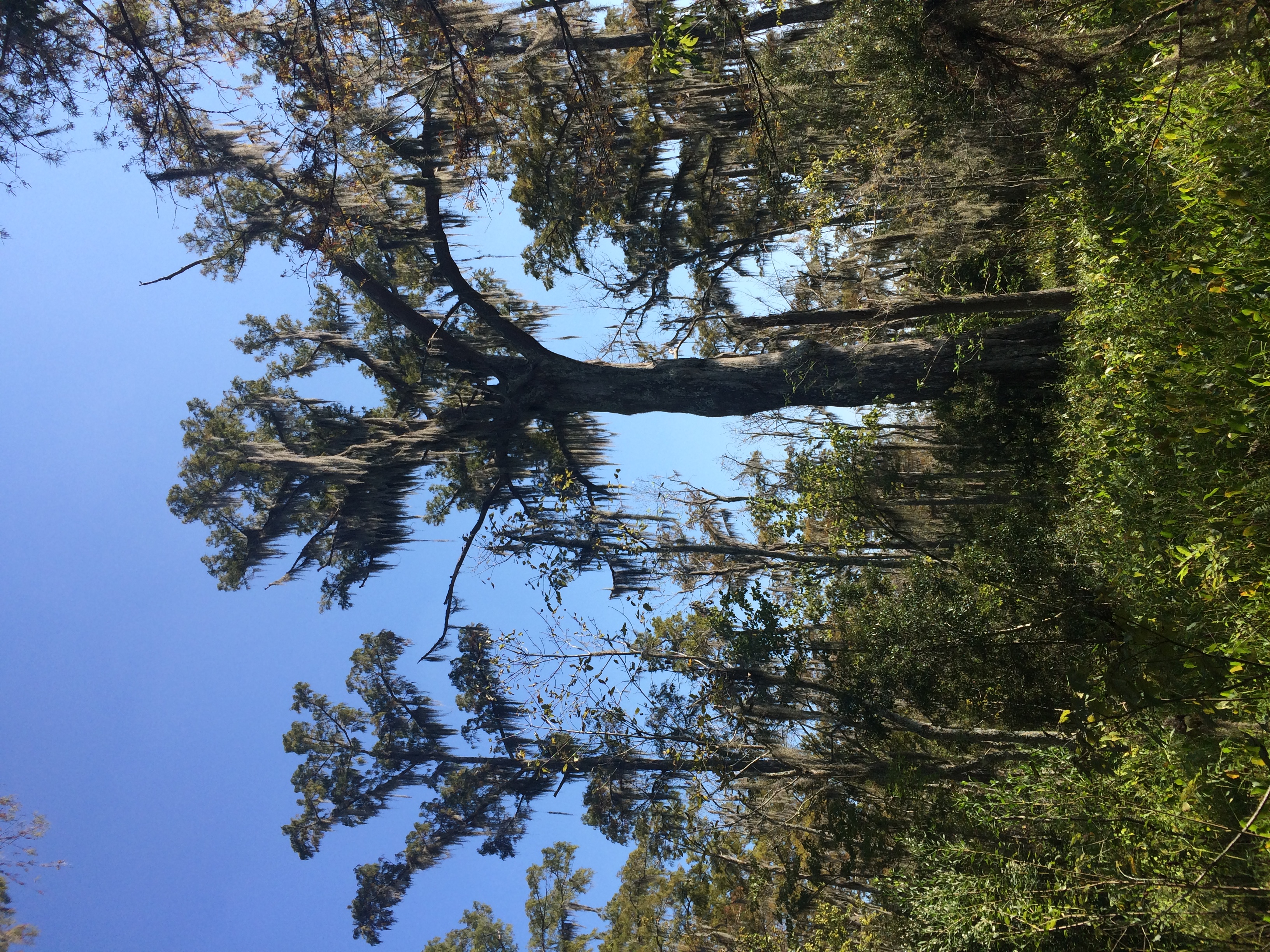 A cypress tree somewhere around 200 years old, spared (for some unknown reason) by loggers when they came through and harvested almost every cypress tree in the swamp in the 19th century. 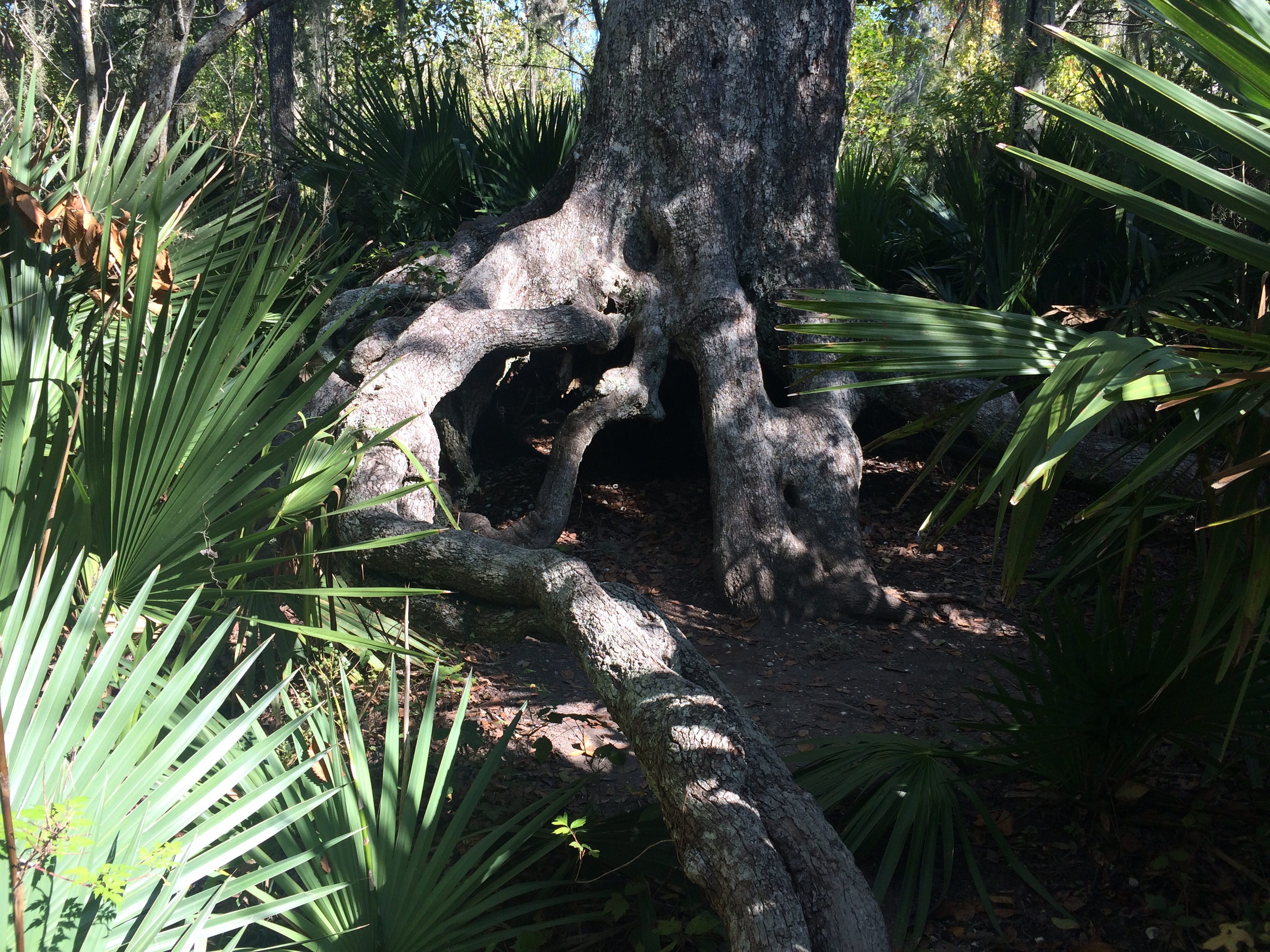 The remains of a giant shell midden! One of the ones our friend John W. Foster mentioned in the paragraph above (“along the banks of Bayou Barataria”)! 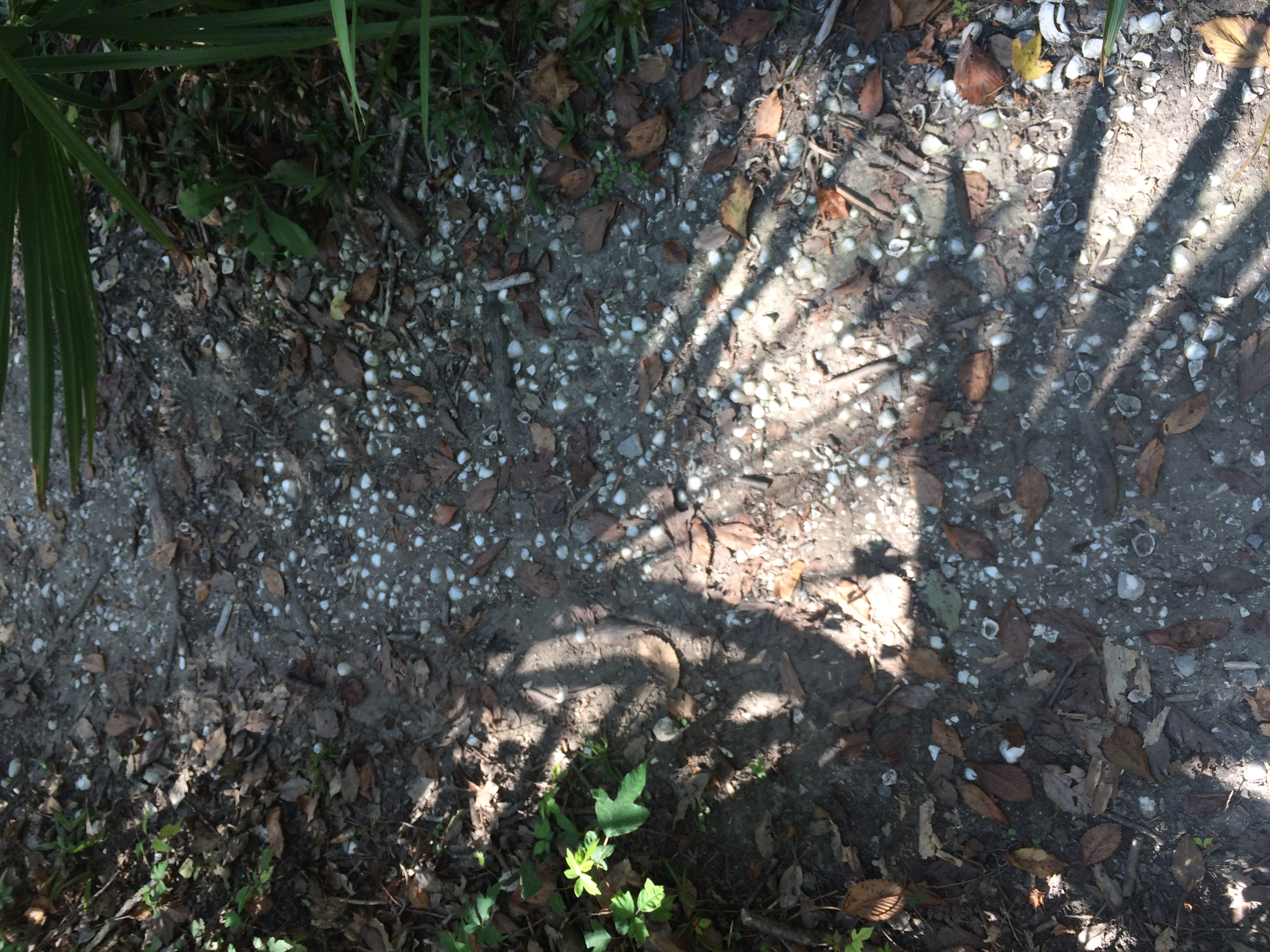 The plaque tells us more: 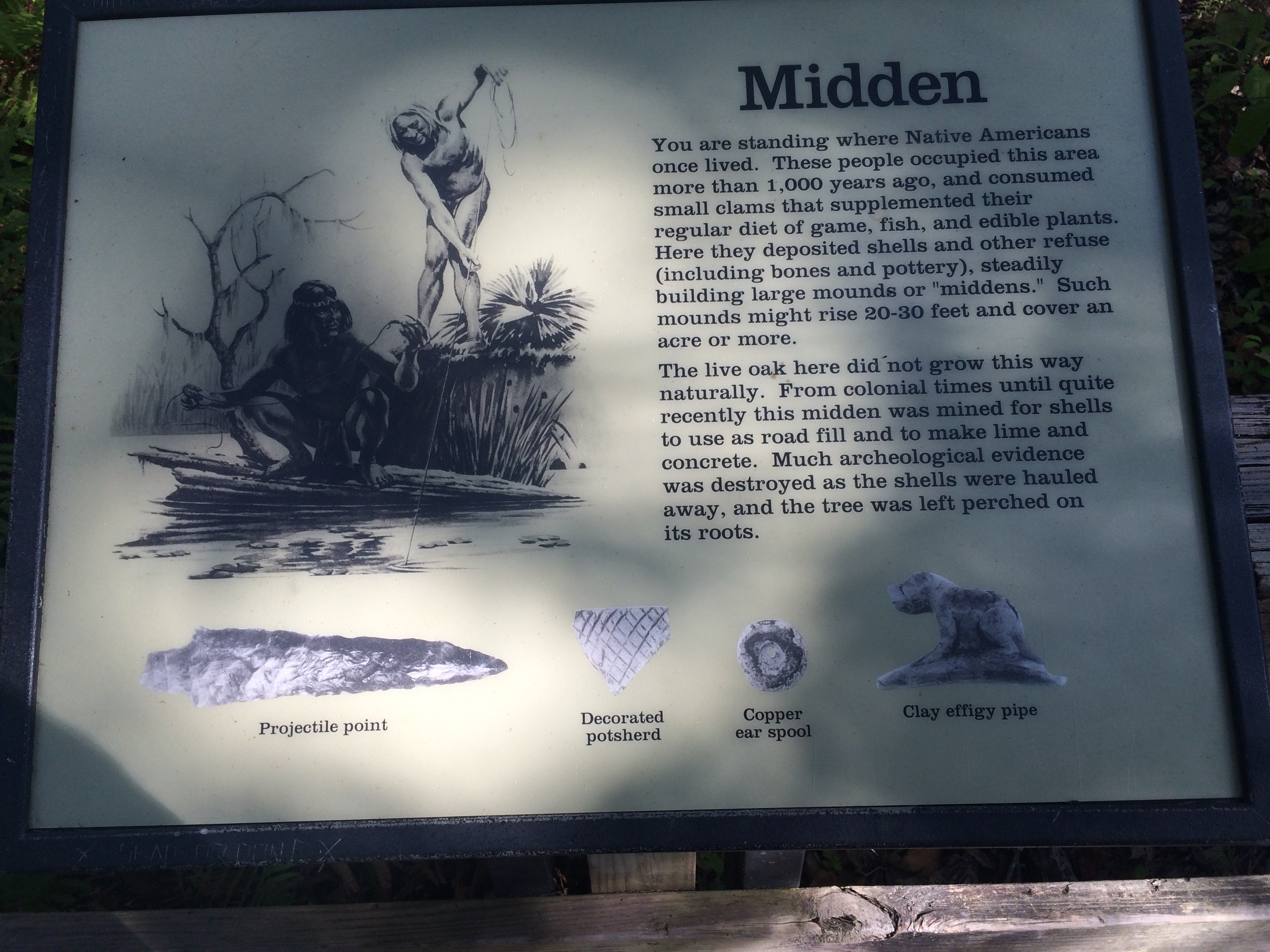 I’m still pondering the importance of that oak tree. I understand that it grew on top of the midden, and then when the midden was hauled away, the oak tree stayed in place. But the oak tree was virtually alone among cypresses and other swampy flora. I’ve since learned that the state park is near (or encompasses?) another former Mississippi River course (more details when I’ve learned more) and is therefore similar in elevation to our Metairie-Gentilly ridge—and therefore has the proper soil and drainage for hardwood trees, like live oaks, to grow. But I’ve also been reading more by Tristram R. Kidder, who I talked about in my last post, and he posits a theory about shell middens actually creating their own mini ecosystems, resulting in species of flora that wouldn’t otherwise be growing there. He even throws out a theory about Native Americans actually purposefully building middens as artificial environments (as opposed to their being merely garbage heaps)—built environments that would provide elevation, as well as nutrients to calciphiles (plants that like calcium-rich soil) or other useful plants that otherwise might not grow in the area….[5]

I have much still to learn on these subjects. Don’t worry—I’ll keep you in the loop!