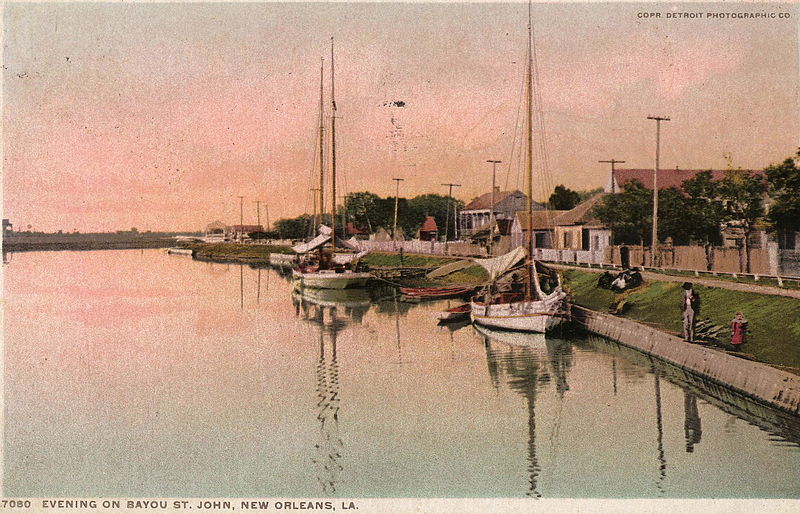 It’s not surprising that in researching historic New Orleans through the lens of its most prominent newspaper, one doesn’t hear about women very much. Or people of color, except when reporters describe their causing a “nuisance,” or their “savage” Voodoo ceremonies in the backswamp along Lake Pontchartrain.…

Really, though. One almost forgets that one hasn’t heard mention of a single female human for the past several hours of research until one pops up, usually in the form of a bayou drowning-victim, or a recent widow of a prominent man, or a woman of “ill refute.”

Sometimes, your eyes get tricked! A “she” or a “her” will pop out of the text, but it’s only in reference to a motorboat or a schooner….

Which got me thinking about the concept of gendering inanimate objects. Why are boats saddled with feminine pronouns, and often cities too? (This once struck me as kind of quaint.) Boats are built and tricked out and ridden to get from place to place—by men exclusively, or at least they used to be. They are used to make money, or are status symbols themselves. They’re often slender and sleek, but that’s probably just a coincidence. Cities were built and planned and operated by men too—and in many ways, they still are.

Here is a 1913 Times-Picayune article from my travels this past week that, aside from being comical, echoes in interesting ways the ideas above:

Charges of piracy and the wanton violation of the maritime laws of the United States are alleged in a libel and complaint personam filed in the United States District Court yesterday against Frederick W. Smith, 2906 St. Ann Street. The complainants in the case are Harry Oldstein, Morris Wise, Henry D. Friedenberg and Arthur Schmidt, owners of the gasoline motor-boat Beaver, who charge the defendant with having illegally taken possession of the vessel on June 24 last, while the boat was lying in the Bayou St. John, and sailed out to Lake Pontchartrain with a party of women on a joy ride. Libelants declare that their yacht was stocked with intoxicating liquors by the defendant, who, after breaking the headline to which she was made fast to the wharf, placed a party of women of ill-fame on board and steamed out to the lake, where all had been guilty of lewd conduct, to the great humiliation, ridicule and contempt of the owners. Damages are asked in the sum of $1,650.” [1]

She, the Beaver, was taken possession of—was freed from her tether, stocked with booze and floozies, and taken on a joy ride. The men who own her are pissed—their property and their reputations have been damaged by this interloper! They want, like, a quarter of the cost of the average 1913 house in return for this embarrassment! Such easy symbolism here, folks….